Thirty Years Among the Dead (Paperback) 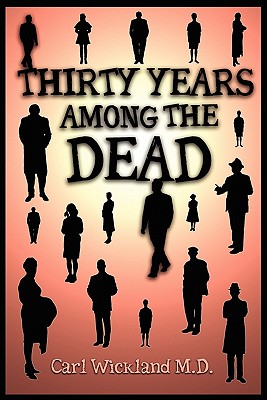 Dr. Carl A. Wickland, (1861-1945) was a member of the Chicago Medical Society, the American Association for the Advancement of Science, and the chief psychiatrist at the National Psychopathic Institute of Chicago. Wickland specialized in cases of schizophrenia, paranoia, depression, addiction, manic-depression, criminal behavior and other phobias. After moving to Los Angeles in 1918, he founded the National Psychological Institute of Los Angeles with his wife Anna Wickland, who was a trance medium. Wickland treated many patients suffering from mental illness of all kinds, and after many years experience came to the conclusion that a number of patients he treated had 'attachments;' by that he meant that spiritual entities had attached themselves to unwitting mortals and influenced them (often) in the worst kind of way-leading them to alcoholism, madness, and occasionally murder. Wickland stated at the time; Spirit obsession is a fact - a perversion of a natural law - and is amply demonstrable. This has been proven hundreds of times by causing the supposed insanity or aberration to be temporarily transferred from the victim to a psychic sensitive who is trained for the purpose, and by this method ascertain the cause of the psychosis to be an ignorant or mischievous spirit, whose identity may frequently be verified. Having come to the 'spirit obsession' conclusion, Wickland and his wife set up a rescue circle, with Mrs. Wickland acting as the medium, and they set about communicating with lost souls who had passed away and were unaware of their post physical death condition and often in denial due to dogmatic religious and equally dogmatic atheist beliefs. In the introduction of the book the author writes, The change called death, the word is a misnomer-universally regarded with gloomy fear, occurs so naturally and simply that the greater number, after passing out of the physical are not aware that the transition has been made, and having no knowledge of a spiritual life they are totally unconscious of having passed into another state of being. Deprived of their physical sense organs, they are shut out from the physical light, and lacking, a mental perception of the high purpose of existence, these individuals are spiritually blind and find themselves in a twilight condition-the outer darkness mentioned in the Bible - and linger in the realm known as the Earth sphere. The book documents a number of cases of both anonymous and well-known communicators such as Helena Blavatsky; cofounder of the Theosophy movement, and Mary Baker-Eddy, the founder of Christian Science. A number of subjects are discussed including crime, suicide, materialism, selfishness, and narcotics.