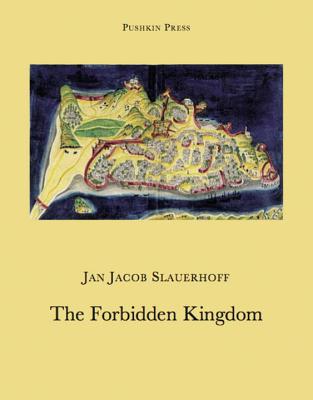 By Jan Jacob Slauerhoff, Paul Vincent (Translated by)
Unavailable at this time.
Unavailable

Slauerhoff’s The Forbidden Kingdom is a blend of historical chronicle, fiction and commentary, bringing together the seemingly unrelated lives of a twentieth century ship’s radio operator and the sixteenth century Portuguese poet-in-exile, Luis Camoes.
Slauerhoff draws his reader into a dazzling world of exoticism, betrayal and exile, where past and present merge and the possibility of death is never far away.
Through a narrative that evolves into a critique of European history, culture and colonialism, Slauerhoff speculates about the lessons to be learnt from history.

Pushkin Collection editions feature a spare, elegant series style and superior, durable components. The Collection is typeset in Monotype Baskerville, litho-printed on Munken Premium White Paper and notch-bound by the independently owned printer TJ International in Padstow. The covers, with French flaps, are printed on Colorplan Pristine White Paper. Both paper and cover board are acid-free and Forest Stewardship Council (FSC) certified.

Jan Jacob Slauerhoff was born in the Leeuwarden, The Netherlands in 1898. After a childhood plagued by bouts of asthma, he studied medicine in Amsterdam, where he also began writing poetry. His first work was published in 1921, and by the end of his life he was considered one of the most important writers in Dutch.
In 1923, upon graduating from university, Slauerhoff signed up as a ship’s surgeon with the Dutch East India Company. Despite poor health, he returned to the sea throughout his life, voyaging many times to the Far East, Latin America and Africa. On his last voyage, to South Africa in 1935, Slauerhoff contracted malaria. He died in Hilversum, The Netherlands in 1936 at thirty-eight.

"His personal involvement and his unique style—sometimes clipped and ironic, at other times lyrical and visionary—give his books a place of their own in the history of the novel." - R.P. Meijer, Literature of the Low Countries

"In his prose he is great and irresistible." - Bert Schierbeek, De Groene Amsterdammer