SUPERHUBS: How the Financial Elite and their Networks Rule Our World (Hardcover) 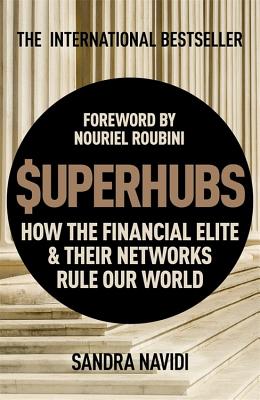 By Sandra Navidi, Nouriel Roubini (Foreword by)
$29.95
Unavailable at this time.

An international bestseller, SUPERHUBS offers a startling new perspective on how the world's elite make the decisions that impact all our lives.A BLOOMBERG Best Book of the Year


$UPERHUBS is a rare, behind-the-scenes look at how the world's most powerful titans, the "superhubs," pull the levers of our global financial system. Combining insider's knowledge with principles of network science, Sandra Navidi offers a startling new perspective on how superhubs build their powerful networks and how their decisions impact all our lives. $UPERHUBS reveals what happens at the exclusive, invitation-only platforms - The World Economic Forum in Davos, the meetings of the International Monetary Fund, think-tank gatherings and exclusive galas. This is the most vivid portrait to date of the global elite: the bank CEOs, fund managers, billionaire financiers and politicians who, through their interlocking relationships and collective influence are transforming our increasingly fragile financial system, economy and society.

Sandra Navidi is the Founder and CEO of BeyondGlobal, a consulting firm, where she renders macroeconomic and strategic positioning advice. Previously, Ms. Navidi worked closely with economist Nouriel Roubini as Director of Research Strategies and Senior Relationship Manager at Roubini Global Economics. Prior to that, Ms. Navidi had positions as investment banker at Scarsdale Equities, general counsel at Muzinich & Co. and consultant at Deloitte. Ms. Navidi holds a law degree from the University of Cologne School of Law, Germany, and a Master-of-Law Degree in Banking Corporate and Finance law from Fordham University School of Law, USA. She is admitted to practice law in the Federal Republic of Germany as well as in the State of New York. As an expert commentator on financial markets, Ms. Navidi has given over 600 interviews on international media outlets and has keynoted at dozens of large industry events.

$uperHubs is beautifully and effectively done. Not only is it a fascinating description of the power wielded by elite networks over the financial sector, it is also a meditation on the consequences of this system for the economy and the society.—PROFESSOR EDMUND S. PHELPS, Columbia University, 2006 Nobel Prize in Economics; Director, Center on Capitalism and Society

In SuperHubs, Ms. Navidi skillfully applies network science to the global financial system and the human networks that underpin it. SuperHubs is a topical and relevant book that should be read by anyone seeking a fresh perspective on the human endeavor that is our financial system.—LAWRENCE H. SUMMERS, Harvard; former US Secretary of the Treasury, former Director of the US National Economic Council

SuperHubs-what a clever concept! Sandra Navidi impresses with a masterful piece of both reporting and analysis.—PROFESSOR KLAUS SCHWAB, Founder and Chairman of the World Economic Forum

Sandra Navidi provides an entertaining and absorbing portrayal of the networks used by many of the top executives in finance. She draws many useful conclusions and provides terrific portraits of some of the major players in finance today.—STEPHEN A. SCHWARZMAN, Chairman, CEO & Co-Founder, Blackstone, and Chairman of U.S. President Donald J. Trump?s Strategic and Policy Forum

An intimate glimpse into the obscure world of high finance ... [that] should be voraciously consumed by anyone in business.—PROFESSOR NOURIEL ROUBINI, Professor of Economics and International Business, Stern School of Business; CEO, Roubini Macro Associates, and Bestselling Author

How are we governed? By whom and how? These are the classical questions which globalization and financial markets have given a new urgency. This book provides a front row seat in the theater of fundamental change.—OLAFUR RAGNAR GRIMSSON, President of Iceland 1996-2016

SuperHubs is an analytical, engaging and insightful guide. It is a must read for all who are striving for growth and excellence!—HIS EXCELLENCY, MR. SHAUKAT AZIZ, former Prime Minister and Finance Minister of Pakistan, former CEO of Citibank Global Wealth Management

SuperHubs offers new insight into those with the power to change the world.—PROFESSOR IAN BREMMER, Founder and President of Eurasia Group

SuperHubs offers a balanced analysis of the system's driving forces and raises controversial issues regarding the far-reaching impact of a few all-powerful individuals, addressing the fundamental aspects of the complex human dynamics ruling finance and the world. A spirited and riveting book that makes for an intriguing read.—BORIS COLLARDI, CEO of Bank Julius Bär

This book is unique in describing and analyzing the human behavior in the upper circles of the global financial system. I agree with the author that unethical behavior has aggravated the increasing wealth gap and social stratification, and thus has fundamentally shaken society's trust in our financial system. The need for political action to save banks in the crisis of 2008, made clear that the financial system is a not just a private sector but also a common good. It is this orientation on the common good and the wellbeing of ordinary people that has to be included in capitalism at large and the financial sector in particular. This book will empower readers to advocate for change.—AART DE GEUS, Chairman and CEO, Bertelsmann Stiftung

An expert tour guide, Ms. Navidi helps us understand the mechanisms that drive our global financial system by ultimately telling a human story of how a select few wield incredible financial and political power. SuperHubs is a substantive book with just the right balance of research and stories to make it an entertaining and satisfying read.—THE HONORABLE GEORGETTE MOSBACHER, Entrepreneur

SuperHubs is dedicated to a vitally important topic: the state of our financial system and its implications for society. If you want to understand how our world works this book is for you.—PROFESSOR DIMITAR D. SASSELOV, Phillips Professor of Astronomy, Harvard University, Director, Harvard Origins of Life Initiative

Navidi will be remembered as the woman who revealed how the 1% maintain their plutocracy.—PROFESSOR DOUGLAS RUSHKOFF, Professor of Media Theory and Digital Economics at City University of New York

Readers will recognize how the relations of those who pull the levers of global power are the bonds of influence that shape the world.—PARAG KHANNA, Senior Research Fellow Lee Kuan Yew School of Public Policy

SuperHubs deftly takes the reader through the global and societal consequences of those people's relationships, power and money.—BILL BROWDER, Co-founder and CEO Hermitage Capital Management and human rights activist

SuperHubs is indispensable for readers who want to understand the financial world's dynamics. Her fascinating insider's perspective reveals complex linkages among the financial elite and the resulting far-reaching consequences. SuperHubs is a blockbuster!—HANS DEMMEL, CEO n-tv (RTL Group)

We will see how financial oligarchs have instrumentalized most governments to realize their interests. We are very far away from reform. SuperHubs demonstrates, how far off.—PROFESSOR MAX OTTE, University of Applied Sciences Worms, head of the Cologne-based IFVE Institut für Vermögensentwicklung GmbH

SuperHubs vividly describes how homogeneous alpha males maximize their opportunities. Readers will wish that this type of financial elite will disappear, or at the very least, include more women.—PROFESSOR THOMAS MAYER, former Chief Economist of Deutsche Bank Group; Head of Deutsche Bank Research

Navidi has thoughtfully determined that a few powerful people rule the world with their extensive networks. May SuperHubs inspire them to make it a more humane and peaceful place.—ROBERT SALZL, Member of the Foundation Board and Senior Adviser, Schörghuber Stiftung & Co. Holding KG

Navidi describes vividly and without taboos how the financial elite have created their own cosmos and why it is about time to scrutinize the rules upon which this system is based.—ANNETTE HEUSER, CEO, Professor Otto Beisheim Foundation