The FBI Way: Inside the Bureau's Code of Excellence (Compact Disc) 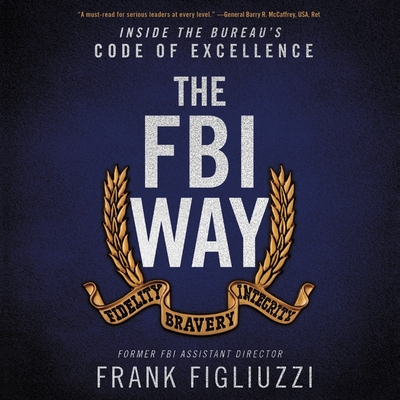 A must read for serious leaders at every level. --General Barry R. McCaffrey (Ret.)

The FBI's former head of counterintelligence reveals the Bureau's field-tested playbook for unlocking individual and organizational excellence, illustrated through dramatic stories from his own storied career

Frank Figliuzzi was the Keeper of the Code, appointed the FBI's Chief Inspector by then-Director Robert Mueller. Charged with overseeing sensitive internal inquiries, shooting reviews, and performance audits, he ensured each employee met the Bureau's exacting standards of performance, integrity, and conduct. Now, drawing on his distinguished career, Figliuzzi reveals how the Bureau achieves its extraordinary standard of excellence--from the training of new recruits in The FBI Way to the Bureau's rigorous maintenance of its standards up and down the organization. Unafraid to identify FBI execs who erred, he cites them as the exceptions that prove the rule.

All good codes of conduct have one common trait: they reflect the core values of an organization. Individuals, companies, schools, teams, or any group seeking to codify their rules to live by must first establish core values. Figliuzzi has condensed the Bureau's process of preserving and protecting its core values into what he calls "The Seven C's". If you can adapt the concepts of Code, Conservancy, Clarity, Consequences, Compassion, Credibility, and Consistency, you can instill and preserve your values against all threats, internal and external. This is how the FBI does it.

Figliuzzi's role in the FBI gave him a unique opportunity to study patterns of conduct among high-achieving, ethical individuals and draw conclusions about why, when and how good people sometimes do bad things. Part pulse-pounding memoir, part practical playbook for excellence, The FBI Way shows listeners how to apply the lessons he's learned to their own lives: in business, management, and personal development.