The Mis-Education of the Negro (Paperback) 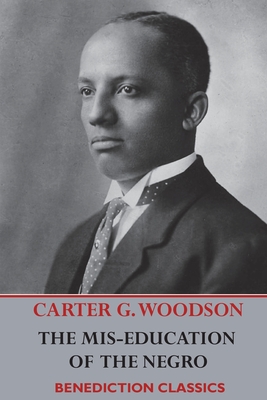 Carter Godwin Woodson (December 19, 1875 - April 3, 1950) was an African American historian, author, journalist. He was the son of former slaves. Being eager to gain an education, he attended high school part time while mostly working in the coal mines of Kentucky. After a period of teaching, he went onto Berea College, which remarkably was co-educational, interracial, and charged no fees. Later he would attend the University of Chicago and then Harvard University, where, in 1912, he was the first child of former slaves to earn a doctorate. He had several teaching and governing roles in academia, including one in teaching in the Philippines and one as Dean of the College of Liberal Arts at Howard University, Washington D.C.

Woodson passionately believed in the importance of the study of African American history and culture. His conviction that the way these topics were approached by both whites and non-whites was detrimental to the African American cause led him to found The Journal of Negro History (now The Journal of African American History). In February 1926 he launched the celebration of "Negro History Week", the precursor of Black History Month. He wrote thirty varied works on the African diaspora. He never married, quipping that he was married to his work.

In The Mis-Education of the Negro, first published in 1933, Woodson argues that the Negro education of his time was aimed at maintaining the position of the Negro as a second class citizen in an apparently more benevolent way than the Jim Crow laws. It is an accessible, informative, and passionate book; essential reading for the understanding of race relations. This edition is set in a clear easy to read 11 point font.