What Comes After Farce (Hardcover) 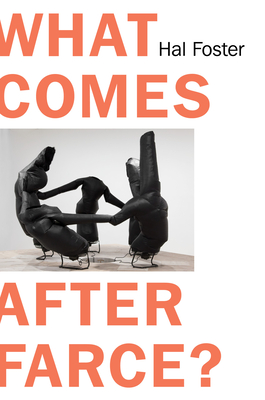 Surveying the artistic and cultural scene in the era of Trump

If farce follows tragedy, what follows farce? Where does the double predicament of a post-truth and post-shame politics leave artists and critics on the Left? How to demystify a hegemonic order that dismisses its own contradictions? How to belittle a political elite that cannot be embarrassed, or to mock party leaders who thrive on the absurd? How to out-dada President Ubu? And, in any event, why add outrage to a media economy that thrives on the same?
What Comes After Farce? comments on shifts in art, criticism, and fiction in the face of the current regime of war, surveillance, extreme inequality, and media disruption. A first section focuses on the cultural politics of emergency since 9/11, including the use and abuse of trauma, paranoia, and kitsch. A second group reviews the neoliberal makeover of art institutions during the same period. Finally, a third section surveys transformations in media as reflected in recent art, film, and fiction. Among the phenomena explored here are "machine vision" (images produced by machines for other machines without a human interface),"operational images" (images that do not represent the world so much as intervene in it), and the algorithmic scripting of information so pervasive in our everyday lives.

Hal Foster is the author of numerous books, including The Art-Architecture Complex (Verso, 2011), The First Pop Age: Painting and Subjectivity in the Art of Hamilton, Lichtenstein, Warhol, Richter, and Ruscha (Princeton, 2012), Bad New Days: Art, Criticism, Emergency (Verso, 2015), and, with Richard Serra, Conversations about Sculpture (Yale, 2018). He teaches at Princeton University, co-edits the journal October, and contributes regularly to the London Review of Books.

“These essays, mostly on art (and culture and politics and violence and technology) read as one seamless and disturbing account of a catastrophic historical epoch: our own. Hal Foster offers no solace but instead his deft and trenchant wisdom on how we got here.”
—Rachel Kushner

“Every word cuts to the quick in this extraordinary book. Foster shows that true criticism must be swift and surgical, but it must also hurt. He casts his relentless and unflinching gaze on the crises of our time, from new fundamentalisms to alternative facts, from cultural imperialism to perpetual war. And yet these essays do not pose the twenty-first century as a cycle of tragedy and farce, doomed to repeat itself, but as a threshold—through which art can, and perhaps must, take us.”
—Michelle Kuo

“What Comes After Farce confirms what many have known for a long time: Hal Foster is indisputably the most important cultural critic writing in English today. No one else consistently offers such nuanced and cogent analyses of the tangled trajectories of the arts and media in this era of globalized financial capitalism. At the same time, few come close to Foster’s discerning familiarity with the work of the most venturesome artists, novelists, filmmakers, and architects or to his critical understanding of the difficulties and challenges now facing them in our current state of emergency.”
—Jonathan Crary, author of 24/7

“The rapid pace of Foster’s prose captures the frenzied historical moment he is exploring, and his reluctance to offer simple answers acknowledges that multiple possibilities for reshaping our culture are currently ranged against each other … [this] lively and eloquent book convinces us that provocative artistic interventions remain possible.”
—Oliver Eagleton, Guardian

“Foster traces how artists have responded to the political situation, while also asking how art criticism should respond to artworks and, through them, the broader moment … The title is apt, not only because it invokes a great problem facing the left—how to imagine a future amid this mess—but also because it reflects the interrogative quality of the book’s texts.”
—Erika Balsom, Art in America

“The clarity of his prose is satisfying in itself … While I was reading What Comes After Farce? I felt that I was in the hands of one of the most skillful critics at work today.”
—Barry Schwabsky, The Nation

“Foster’s various texts move smartly and broadly across spheres ranging from sculpture and painting to cinema and literature, but most consistently he choreographs a dance between art and the larger culture that is its cradle. The articulation of one always imprints the other. Time and again in this respect, Foster is a pleasure to read for his sweeping statements that are still earned in their matter-of-factness, as when he makes short work of the contemporary art world’s spiraling expansion in tandem with shifting economic structures.”
—Tim Griffin, Artforum