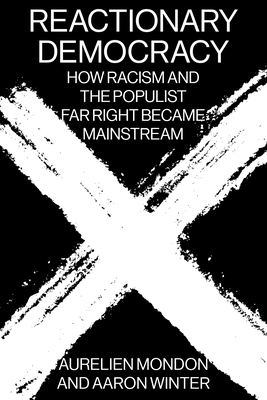 By Aurelien Mondon, Aaron Winter
$26.95
Out of stock, usually available in 1-5 days

Democracy is not necessarily progressive, and will only be if we make it so. What Mondon and Winter call 'reactionary democracy' is the use of the concept of democracy and its associated understanding of the power to the people (demos cratos) for reactionary ends. The resurgence of racism, populism and the far right is not the result of popular demands as we are often told. It is rather the logical conclusion of the more or less conscious manipulation by the elite of the concept of 'the people' and the working class to push reactionary ideas. These narratives place racism as a popular demand, rather than as something encouraged and perpetuated by elites, thus exonerating those with the means to influence and control public discourse through the media in particular. This in turn has legitimised the far right, strengthened its hand and compounded inequalities.

These actions diverts us away from real concerns and radical alternatives to the current system. Through a careful and thorough deconstruction of the hegemonic discourse currently preventing us from thinking beyond the liberal vs populist dichotomy, this book develops a better understanding of the systemic forces underpinning our current model and its exploitative and discriminatory basis. The book shows us that the far right would not have been able to achieve such success, either electorally or ideologically, were it not for the help of elite actors (the media, politicians and academics). While the far right is a real threat and should not be left off the hook, the authors argue that we need to shift the responsibility of the situation towards those who too often claim to be objective, and even powerless, bystanders despite their powerful standpoint and clear capacity to influence the agenda, public discourse, and narratives, particularly when they platform and legitimise racist and far right ideas and actors.

Aurelien Mondon researches and teaches at the University of Bath. His research focuses predominantly on the impact of racism and populism on liberal democracies and the mainstreaming of far right politics through elite discourse. His first book, The Mainstreaming of the Extreme Right in France and Australia: A Populist Hegemony?, was published in 2013 and he recently co-edited After Charlie Hebdo: Terror, Racism and Free Speech.

Aaron Winter is Senior Lecturer in Criminology at the University of East London. His research is on the far right, with a focus on racism, violence and mainstreaming. He is co-editor of Discourses and Practices of Terrorism: Interrogating Terror (2010) and more recently, Historical Perspectives on Organised Crime and Terrorism (2018). He has published in the journals Ethnic and Racial Studies, Identities: Global Studies in Culture and Power, Sociological Research Online and Women and Performance: A Journal of Feminist Theory.

“A powerful account of how liberal media and political elites have colluded with far-right forces, fatally undermining the emancipatory potential of democratic systems of government.”
—Imogen Tyler

“Reactionary Democracy is a powerful analysis of how the ‘respectable’ centre ground is far from innocent in the rise of the far right. Mondon and Winter show how racist ideas have been promoted not just through far right activism but also through everyday language on immigration and identity in mainstream politics and media. Drawing on examples from the US, France and the UK, they argue that elite voices are responsible for normalising anti-immigrant views and facilitating conditions exploited by a resurgent right. The book provides a much-needed health warning against the notion that liberal democracy is a natural ally against racism. By insisting that we should stop ‘hyping’ the far right and start challenging it, the book eloquently promotes a full-throttle anti-racism when we need it most.”
—Des Freedman

“A clever, timely interrogation of what racism truly means, and why it persists in modern liberal democracies. Everyone needs to read this.”
—Angela Saini

“Reactionary Democracy makes an important contribution to critical thought by mapping the complex ways in which racism has acquired renewed force in the contemporary conjuncture. Drawing expertly on developments in the US, UK and France, the entangled logics of liberal and illiberal racisms are carefully illuminated making transparent the complicity of liberalism with its so-called populist alternative. With liberalism’s commitment to democracy compromised, Mondon and Winter boldly call for the construction of an emancipatory, transformative politics committed to ending all structures of oppression and thereby actualizing the promise of democracy for all.”
—Satnam Virdee

“Mondon and Winter offer a razor sharp analysis of the relationship between racism and liberalism to rethink the resurgence of far right, populist politics. Ultimately, this is a hopeful book that demands more from democracy and from ourselves--only by resisting racism and other hierarchical exclusions can we hope to build egalitarian futures.”
—Professor Akwugo Emejulu Department of Sociology University of Warwick

“An impressively lucid and hard-hitting primer on some of the gravest dangers of the Western present. With unsparing clarity and nuance, Mondon and Winter delineate how vitiated and retrograde the practice of democracy is today, how it remains in thrall to elite manipulation, and how both racism and white supremacy are central to this project of control and consent. This book makes for uncomfortable reading--which is why it is so urgent and necessary. We can’t afford not to hear what it has to say.”
—Priyamvada Gopal

“It is hard to think of a more necessary and welcome intervention than Reactionary Democracy. The mantle of ‘the market place of ideas’ has emboldened racism and undermined democracy. The agents of this movement have their allies, and with this book democrats and anti-racists have theirs. A powerful and compelling contribution.”
—Professor Nasar Meer, FAcSS; FRSE, University of Edinburgh

“Reactionary Democracy offers a sustained critical reading of the recent platforming of the populist racist right. Aurelion Mondon and Aaron Winter trace the ways in which this focus on extreme expressions draws attention away from systemic racism and the inequalities capitalism licenses and reproduces. The result is a timely analysis of the the processes and narratives enabling the reproduction of systemic racism.”
—David Theo Goldberg

“Reactionary Democracy is an important and incisive contribution to the burgeoning literature on the rise of the far-right in the US, France, and the UK. Challenging the popular narrative that these movements are an inevitability, Mondon and Winter show that the Right’s new found power was hardly the will of the people. The right’s mainstreaming relied upon a complicit media (unable to adapt to bad-faith and racist provocateurs) and politicians willing to adopt the right’s rhetoric. If you want to know how we got into this mess, and are committed to a progressive path out of it, Reactionary Democracy helps to a critical roadmap.”
—Victor Ray

“In elaborating their argument about the mainstreaming of racism, Mondon and Winter register shifts and divergences across different national contexts, providing a thoughtful response to excitable narratives about the global rise of ‘populism.’ Theirs is also a ferocious, mobilising critique, properly partisan while unsparing of progressive mythologies. They point us towards what’s needed to defeat the far-right, not just by engaging with its contemporary complexity and affinities, but by demonstrating incisively how it benefits from wider social and political contradictions.”
—Gavan Titley

“Fires a rescue flare warning that the threat to civil society, human rights, and democracy itself must not be ignored—before it is too late.”
—Chip Berlet

“Reactionary Democracy is destined to be one of the indispensable books of our time, a work drawing upon the enduring debate about the causes of systemic racism. Introducing readers to the entanglement of racism and liberal democracy, this co-authored book seeks to shed new light on how these forms of power interact and the possibilities emerging in the wake of this.”
—Rahel Süß, LSE Review of Books