First Class Passengers on a Sinking Ship: Elite Politics and the Decline of Great Powers (Hardcover) 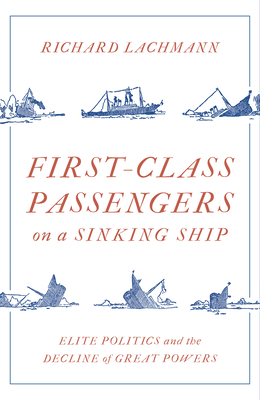 By Richard Lachmann
$34.95
Out of stock, usually available in 1-5 days

Why great powers decline, from Spain to the United States

The extent and irreversibility of US decline is becoming ever more obvious as America loses war after war and as one industry after another loses its technological edge. Lachmann explains why the United States will not be able to sustain its global dominance, and contrasts America's relatively brief period of hegemony with the Netherlands' similarly short primacy and Britain's far longer era of leadership.

Decline in all those cases was not inevitable and did not respond to global capitalist cycles. Rather, decline is the product of elites' success in grabbing control over resources and governmental powers. Not only are ordinary people harmed, but also capitalists become increasingly unable to coordinate their interests and adopt policies and make investments necessary to counter economic and geopolitical competitors elsewhere in the world.

Conflicts among elites and challenges by non-elites determine the timing and mold the contours of decline. Lachmann traces the transformation of US politics from an era of elite consensus to present-day paralysis combined with neoliberal plunder, explains the paradox of an American military with an unprecedented technological edge unable to subdue even the weakest enemies, and the consequences of finance's cannibalization of the US economy.

Richard Lachmann is Professor at the University of Albany-SUNY and is the author of Capitalists In Spite of Themselves: Elite Conflict and Economic Transitions in Early Modern Europe (Oxford, 2000), States and Power (Polity 2010) and What Is Historical Sociology? (Polity 2013).

“‘Hegemonic decline,’ to borrow a phrase from one of Trump’s ancestors, makes one want to release the safety catch on one’s Browning. A petrified debate whose time had come and gone … or so I believed until I opened Lachmann. This is a highly original synthesis that blends world systems theory and comparative history with an astute analysis of contemporary US politics to draw powerful and uncomfortable conclusions.”
—Mike Davis

“One of the most important developments in recent times is the American elites’ loss of influence in global affairs, concurrent with its consolidation of power at home. In this brilliant, sweeping analysis, Richard Lachmann connects the dots and explains how the two processes are related. Placing the United States in the context of its imperial predecessors, he helps us understand America’s place in the rogues’ gallery of global powers. And most importantly, he helps us see that the American oligarchs will be perfectly happy to see the rest of the nation sink, if that’s what it takes to hold on to their dwindling possessions. A work of great depth and moral clarity, it deserves the widest possible audience.”
—Vivek Chibber

“In this historically deep and richly cross-national study of empires and hegemons, Richard Lachmann brings forth new information and a highly original analysis to cast a bright light on the United States and its likely future. Whether social scientists and historians are inclined to agree with him or not, they will have to deal with the fact that his analysis shows that all of them are at least partially wrong about empires and hegemons in one way or another.”
—G. William Domhoff, Distinguished Professor Emeritus and Research Professor, University of California, Santa Cruz

“This is a powerful, often brilliant, comparative account of the rise and especially the decline of hegemonic powers, focusing most on the Netherlands, Britain, and the United States. Emphasis is placed on the way in which competing elites within the hegemon pursue their own narrow interests to block effective coping with decline. Particularly sobering and convincing is the bleak outlook presented for the future of the United States.”
—Michael Mann, Distinguisher Research Professor, UCLA, author of The Sources of Social Power

“Working on a strikingly broad comparative canvass Lachmann bridges two genres that are usually widely separate: serious comparative historical sociology, and public engagement. His book asks ‘what is the connection between the structure of elite relations and the durability of hegemony, understood as a form of power in which the leadership of the dominant group is “perceived by subordinate groups as serving a more general interest”?’ Hegemons, unlike simple empires, set the global rules of the game. Their power ‘thus … extends beyond their formal and informal territorial possessions to encompass the entire world.’ Lachmann’s answer to this question is that hegemony is possible where there exist plural elites combined with a low level of elite conflict. Where, in contrast, elites are singular (as in the Nazi or Napoleonic empires) or where there is a high level of conflict (as in the Absolutist cases), hegemony is impossible. In the first sort of case elites simply dominate the lands that they conquer in order to extract resources without gaining any local allies. In the second case elites entrench their own interests at the expense of the general interest; they thus become ‘autarkic’ and their own interests split apart from the general interest. This brilliant book, written in the venerable tradition of C. Wright Mills, will be of interest to a wide range of scholars and to the educated public at large. Lachmann shows that comparative and historical sociology is alive and kicking. Bravo!”
—Dylan Riley