The Man Who Fell to Earth: The Official Movie Adaptation (Graphic Novel) (Hardcover) 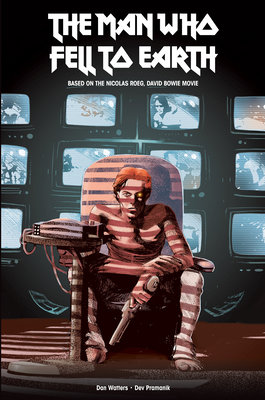 This book includes a gallery of never-before-seen photos used to illustrate an exclusive feature on the making of the movie. Also included is a bonus section showcasing the development of the book itself.

The film, based on the classic science fiction novel by Walter Trevis, sees an extra-terrestrial called Thomas Jerome Newton (played in the movie by David Bowie) land on Earth in search of water to save his dying home planet. Using his advanced scientific knowledge, Thomas becomes incredibly rich and uses his wealth to search for a way to transport water back to his home planet. But as his mission on Earth drags on, Thomas becomes seduced by the excesses of our world and desperate to return home unaware he has become a target of interest for the U.S. Government and a sinister corporation, eager to exploit him.

Dan Watters is a UK-based comic-book writer. His first book, LIMBO, was released through Image Comics in 2016. He has since written THE SHADOW for Dynamite Comics, and ASSASSIN’S CREED, WOLFENSTEIN and the 2022 smash-hit COWBOY BEBOP for Titan Comics.


Currently he is writing Arkham City: the Order of the World for DC Comics, and Home Sick Pilots for Image Comics.

Dev Pramanik studied at the Jalpaiguri Government Engineering College. His first published work was on Nightbreedbreed #9-11. He went on to work on Vampire: The Masquerade, Paradiso and Firefly as well as working with Ram V on both Grafity’s Wall and Black Mumba. He recently finished work on the comic adaptation of the prequel to Dune: House Atreides.

"I read this in one fast, thirsty gulp.  It's a beautiful representation of a story that prods both the mind and the heart. I fell, and you will, too." Gail Simone

"Roeg's cult classic is more influential on comics than even most classic comics. It's a joy to see it interpreted by two of comics smartest new creators. Absolutely unearthly." - Kieron Gillen

"It’s a difficult thing to interpret a tale like The Man Who Fell To Earth and find a completely different take on it, but Watters and Pramanik have pulled it off with style. They’ve honoured Bowie, Tevis and Roeg with their atmospheric, near-folkloric version of the story, which should intrigue and delight Bowiephiles everywhere." - Nick Abadzis

"An intense artistic trip that is both faithful to the movie and transcends it. Bowie belongs in comics." - Paul Cornell

"A classic tale about an alien who is used and corrupted by the worst elements of human society, The Man Who Fell to Earth is a memorable graphic novel whose cautionary notes still ring true." - Foreword Reviews

"A compelling tale that remains a brilliantly dark satire on consumerism. You can feel Bowie's presence on every panelled page. 4 stars out of 5!" - Total Film

"Reshapes the story for a new medium and generation." - NME

"Fans of the film ought to enjoy this new interpretation..." - Slings and Arrows

"A welcome alternative to the movie...Dev Pramanik perfectly captures Bowie’s Newton. 9 out of 10!" - Sci-Fi Bulletin