Revolution in the Air: Sixties Radicals Turn to Lenin, Mao and Che (Paperback) 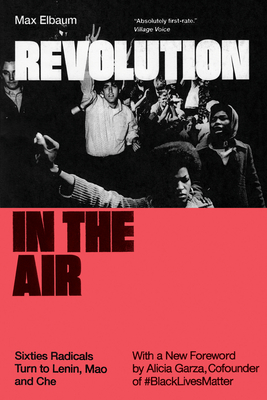 The sixties were a time when radical movements learned to embrace twentieth-century Marxism. Revolution in the Air is the definitive study of this turning point, and examines what the resistance of today can learn from the legacies of Lenin, Mao and Che.

It tells the story of the “new communist movement” which was the most racially integrated and fast-growing movement on the Left. Thousands of young activists, radicalized by the Vietnam War and Black Liberation, and spurred on by the Puerto Rican, Chicano and Asian-American movements, embraced a Third World oriented version of Marxism. These admirers of Mao, Che and Amilcar Cabral organized resistance to the Republican majorities of Nixon and Ford.

By the 1980s these groups had either collapsed or become tiny shards of the dream of a Maoist world revolution. Taking issue with the idea of a division between an early “good sixties” and a later “bad sixties,” Max Elbaum is particularly concerned to reclaim the lessons of the new communist movement for today’s activists who, like their sixties’ predecessors, are coming of age at a time when the Left lacks mass support and is fragmented along racial lines.

With a new foreward by Alicia Garza, cofounder of #BlackLivesMatter.

Max Elbaum was a member of Students for a Democratic Society and a leader of one of the main new communist movement organizations. His writings have appeared in the Nation, the US Guardian, CrossRoads, and the Encyclopedia of the American Left. He lives in Oakland.

“It should be required reading for those interested in the modern history of social movements and for radicals of my generation who are trying to find out what went wrong.”
—Los Angeles Times

“Truly a superb work of scholarship that raises all the right questions.”
—Radical History

“The breadth of Elbaum’s knowledge … marks this book as an absolutely first-rate work of political scholarship.”
—Village Voice

“If you still believe sixties radicalism was nothing more than youthful middle-class confusion or parochial identity politics, then open these pages and dig.”
—Robin D. G. Kelley

"Socialists in the twenty-first century don’t have to completely reinvent the wheel — they can learn from the often-heroic efforts of radicals several decades ago. Revolution in the Air is essential reading for the new generation of radicals that wants to get anti-capitalism right this time."
—Micah Uetricht, co-author of Bigger than Bernie: How We Go from the Sanders Campaign to Democratic Socialism

“You can disagree with almost everything Elbaum writes … and still value the clarity with which he poses the questions relevant to an effective anti-racist, feminist and class-conscious revolutionary movement in the twenty-first century.”
—Marx & Philosophy