Policing the Planet: Why the Policing Crisis Led to Black Lives Matter (Paperback) 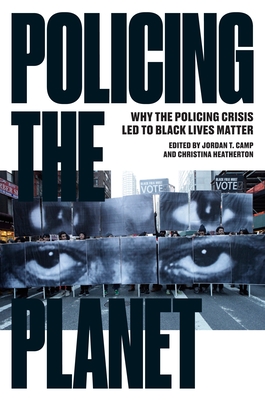 How policing became the major political issue of our time

Combining firsthand accounts from activists with the research of scholars and reflections from artists, Policing the Planet traces the global spread of the broken-windows policing strategy, first established in New York City under Police Commissioner William Bratton. It’s a doctrine that has vastly broadened police power the world over—to deadly effect.

Jordan T. Camp is Visiting Scholar in the Center for Place, Culture and Politics at the Graduate Center of the City University of New York, and Co-Director of the Racial Capitalism Working Group in the Center for the Study of Social Difference at Columbia University.

Christina Heatherton is an Assistant Professor of American Studies at Barnard College.

“This book is the best analytical and political response we have to the historic rebellions in Ferguson! Don’t miss it.”
—Cornel West, author of Black Prophetic Fire

“We owe Jordan Camp and Christina Heatherton a great expression of gratitude for this brilliant and provocative collection of voices that compels us to see the Black Lives Matter Movement in the larger context of twenty-first-century racial capitalism and the growing carceral state.”
—Barbara Ransby, author of Ella Baker and the Black Freedom Movement

“A major work … As someone who certainly admires the work of these scholars, I couldn’t think of a more compelling and timely work such as this. I am pleased to not only be in community with these amazing people but to listen and learn from them … Policing the Planet comes at an incredibly important time.”
—Khalil Gibran Muhammad, Schomburg Center for Research in Black Culture

“When this series of essays addressing contemporary activism’s biggest movement hits stands in May, we’ll be ready. A variety of contributors, including anti-police brutality and militarization activists from around the country and world, promise to make Policing the Planet a definitive work for anybody confused about exactly what structural law enforcement powers lead to our current racial justice climate.”
—Colorlines

“This broad collection of sharp commentary from activists, academics, and artists situates recent struggles right where they belong—in opposition to an increasingly global regime of police abuse.”
—Flavorwire

“Through compiling so many critical voices in one place, Camp and Heatherton have created a much-needed guidebook of resistance to our planet’s police state and the structures of urban governance that feed it.”
—Aaron Cantú, Washington Spectator

“An incredible anthology tracing the bloody history of broken-windows policing and its implications for city life in general.”
—James Tracy, Rooflines

“Policing the Planet is an important intervention to a key issue at a crucial time.”
—Ramor Ryan, TeleSur