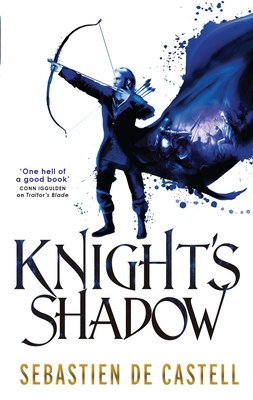 By Sebastien de Castell
$14.99
On our shelves now at one or more of our stores

This is book number 2 in the The Greatcoats series.

Following his beloved debut, Traitor's Blade, Sebastien de Castell returns with volume two of his fast-paced fantasy adventure series, inspired by the swashbuckling action and witty banter of The Three Musketeers. Knight's Shadow continues the series with a thrilling and dark tale of heroism and betrayal in a country crushed under the weight of its rulers' corruption.
A few days after the horrifying murder of a duke and his family, Falcio val Mond, swordsman and First Cantor of the Greatcoats, begins a deadly pursuit to capture the killer. But Falcio soon discovers his own life is in mortal danger from a poison administered as a final act of revenge by one of his deadliest enemies. As chaos and civil war begin to overtake the country, Falcio has precious little time left to stop those determined to destroy his homeland.

Sebastien de Castell had just finished a degree in archaeology when he started work on his first job. Four hours later he realized how much he hated archaeology and left to pursue a very focused career as a musician, ombudsman, interaction designer, fight choreographer, teacher, project manager, actor, and product strategist. These interests and experiences provided fodder for his burgeoning writing career. He lives in Vancouver, Canada, with his wife and is director of strategic program development at the Vancouver Film School

"Traitor's Blade is a swashbuckling romp packed with charisma, camaraderie, quick wit and even quicker swordplay. That said, it's far from candy-coated - and it packs some serious substance . . . darkness is served up deliciously in Traitor's Blade - only de Castell uses it as the sauce, not the soup . . . What makes the book truly sing, though, is its rich historical backdrop . . . De Castell's fight scenes are as sumptuously detailed as the world Falcio inhabits. . . In its own way, Traitor's Blade is as grim and dark as the edgiest fantasy series on the shelves. It's also shot through with heroics, hope and a dazzling aptitude for fun."
—Jason Heller, NPR

"Like the sword its disgraced protagonist carries, Traitor's Blade is short and sharp and smart, and very well wielded, really . . . With a tip of his hat at Alexandre Dumas, Sebastien de Castell make a fine first impression in this entertaining debut."
—Tor

"The best Musketeers trope since Dumas's original . . . Fights are well-thought out as de Castell is a former "fight choreographer" (I dare you to put that on your tax return). Fighting, swordplay, and escaping from same form most of the action alongside ten kinds of witty banter, bravado and brio- make no mistake, this is a fun read. The light tone is challenged by ruthless villains, especially Duchess Patriana who, though truly repugnant, is as notably well-constructed as other female characters. An energetic, fun adventure that puts the 'musk' back in 'musketeer.' Guaranteed to increase household swashbuckling by 100%."
—Library Journal

"Sebastien De Castell manages to wring every heart wrenching moment and ounce of anticipation from every scene, his fight scenes contain dark humor, explosive action and a great awareness of the art of sword fighting, all of which has you hanging on the edge of every page. (There are also some truly laugh out loud moments in this book.) . . . An exceptional book and series . . . this book is clearly going to be a stand out title."—Parmenion Books

"The shocking ending left my completely stunned . . . Knight's Shadow is the best book I have read this year so far and I'm not sure anything coming out this year can hope to top it!"—The Arched Doorway

"How wonderful it is to be back into this world . . . wildly entertaining . . . Greatcoats is now up there on my list of favorite fantasy series, and I never miss a chance to recommend it to my fellow readers and friends."—Bibliosanctum

"[Knight's Shadow] will blow you away . . . Sebastien de Castell has really, really outdone himself. . . I probably will have to wait another year for the third book in the series but it is definitely worth the wait. The Greatcoats series should be on every reading list."— The Book Plank

"Traitor's Blade was one of the most enjoyable fantasy debuts of the last year . . . both stem from a time when fantasy was just plain fun and promised quests and excitement, when you opened a book expecting to be entertained . . . It's easy to love de Castell's work . . . readable fantasy at its finest."—Upcoming4me

"This is fast, fantastic fun--and it has an excellent character piece wrapped inside it . . . a great read, and very much a worthy sequel."— Sci-fi and Fantasy Reviews

"Ends on a satisfying conclusion that nevertheless leaves room for the story to continue in Saint's Blood."—Starburst Magazine

"This sequel to de Castell's debut, Traitor's Blade, manages to defeat the second book curse and is just as lively, engaging, and action packed as its predecessor. A must-read for fans of Michael Sullivan and Mark Lawrence, this book will have broad appeal to both teen and adult readers of swashbuckling heroic fantasy."—Library Journal

"My love for the first book could have been a fluke, but this second book has cemented my love for the series before it has even finished. It was so invigorating to go on this dangerous, and sometimes painful, but ultimately satisfying adventure with Falcio, Kest, Brasti and the rest of the Greatcoats. This is a series I recommend everyone to read!"—My Bookish Whimsy

"This time around we get a much more up close and personal look into not just Falcio but Kest and Brasti as well. It was what I was hoping for and I was not disappointed!"—Not Yet Read

"De Castell's superb writing and pacing result in a headlong rush of excitement to the very last page . . . Like Joe Abercrombie, Sebastien de Castell excels at creating characters who give their all in service to a cause, even if it destroys them. The twists and turns make Knight's Shadow a page-turner in the truest, most satisfactory sense of the term."
—Jim Basile, The Oklahoman