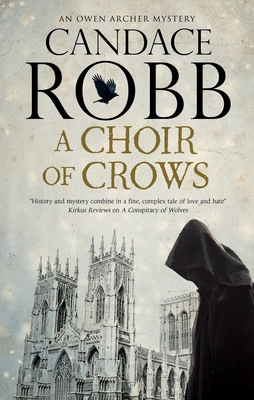 This is book number 12 in the Owen Archer Mystery series.

When two bodies are discovered in the grounds of York Minster shortly before the enthronement of the new archbishop, Owen Archer is summoned to investigate. December, 1374. With the great and the good about to descend on York for the enthronement of Alexander Neville as the new archbishop, the city authorities are in a state of high alert. When two bodies are discovered in the grounds of York Minster, and a flaxen-haired youth with the voice of an angel is found locked in the chapter house, Owen Archer, captain of the city bailiffs, is summoned to investigate. Tension deepens when an enigmatic figure from Owen's past arrives in the city. Why has he returned from France after all these years - and what is his connection with the bodies in the minster yard and the fair singer? Before Owen can make headway in the investigation, a third body is fished out of the river - and the captain finds himself with three mysterious deaths to solve before the all-powerful Neville family arrives in York.