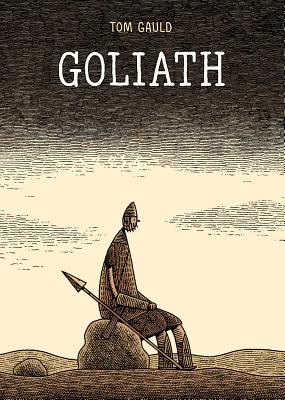 In the skilled hands of cartoonist Tom Gauld, the story of David and Goliath becomes a downbeat and melancholy meditation on the human cost of war. Gauld’s retelling centers on a gentle-hearted Goliath, better suited to administrative work than combat, who becomes a reluctant bargaining chip in a conflict beyond his ken. Somber, quiet, and darkly funny, Tom Gauld’s Goliath is a testament to the power of visual and narrative minimalism.

Since the 2011 release of Goliath, Tom Gauld has solidified himself as one of the world’s most revered and critically-acclaimed cartoonists working today. From his weekly strips in The Guardian and New Scientist, to his lauded graphic novels You’re All Just Jealous of My Jetpack and Mooncop, Gauld’s fascination with the intersection between history, literary criticism, and pop culture has become the crux of his work.

Now in paperback, with a new cover and smaller size, Goliath is a retelling of the classic myth, this time from Goliath’s side of the Valley of Elah. Goliath of Gath isn’t much of a fighter. He would pick admin work over patrolling in a heartbeat, to say nothing of his distaste for engaging in combat. Nonetheless, at the behest of the king, he finds himself issuing a twice-daily challenge to the Israelites: “Choose a man. Let him come to me that we may fight.”

Tom Gauld is a cartoonist and illustrator. He has weekly comic strips in The Guardian and New Scientist and his comics have been published in The New York Times and The Believer. In addition to his graphic novels You’re All Just Jealous of My Jetpack and Mooncop, he has designed a number of book covers. Gauld lives and works in London.