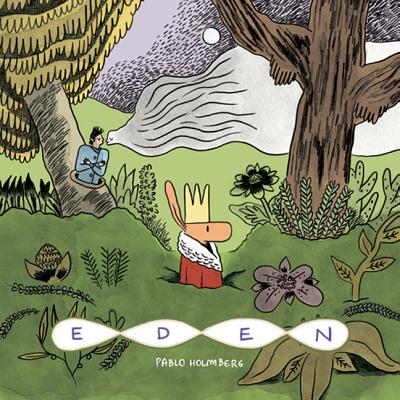 By Pablo Holmberg
$16.95
On our shelves now at one or more of our stores

Pablo Holmberg's graphic novel is delightful and surprising and strange. It feels like discovering something precious you thought you'd lost, or seeing an old friend you never expected to meet again. Within each four-panel page's self-contained world, lovers meet, friends quarrel, and a lonely rabbit-eared king paces the hills with a star in his pocket. It's the perfect world to step into if you need something quiet and magical in your life right now. — From Christina

A quiet, whimsical world from an Argentinian newcomer

Argentinean artist Pablo Holmberg creates a bucolic, medieval folktale in Eden, where nature is the protagonist and characters are the scenery. Follow a king as he converses with the moon, a star as it is born, and many more in four-panel strips that combine the playfulness of a Sunday comic with the simplicity of a haiku. Surreal yet friendly and approachable, each strip celebrates the thrill of being alive and encourages the reader to do the same. Eden is Holmberg's chimerical cosmos where the author's imaginative storytelling is purposely reliant on the reader's interpretation.

In this playful new collection of comic strips that were originally syndicated on his website, Holmberg reinvents the comic strip convention by emphasizing situations and natural landscapes rather than personalities and human interaction.

Pablo Holmberg was born in 1979 in Buenos Aires, Argentina. After obtaining a degree in science and communication, he began to focus on cartooning. Holmberg’s comics have been serialized each week on his website since 2004.