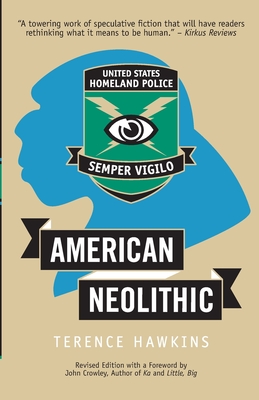 By Terence Hawkins, John Crowley (Foreword by)
$17.00
Out of stock, usually available in 3-10 days

"American Neolithic is a stunning, alarming, and deftly crafted read that has author Terence Hawkins's novel achieving a similar literary status to the likes of George Orwell's 1984"--Midwest Book Review.

It's the day after tomorrow.

America has become a Police State Lite. The Patriot Amendments have swallowed the Bill of Rights. Creationism trumps science. The Patriot Tribunal overrules the Supreme Court. And the drones of the Homeland Police are always watching.

Enter Blingbling. Brought to official attention by a hip-hop murder, he's foreign-looking, undocumented, and apparently homeless. His hard-boiled lawyer, Raleigh, keeps the Homeland cops at arm's length until a routine DNA test exposes a secret thousands of years old--one that threatens to destroy his client, his career, and much more.