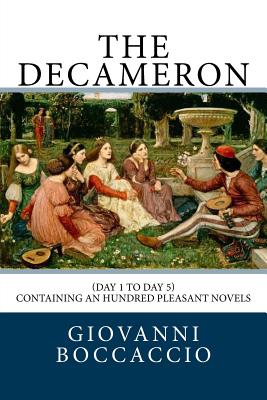 Decameron, collection of tales by Giovanni Boccaccio, probably composed between 1349 and 1353. The work is regarded as a masterpiece of classical Italian prose. While romantic in tone and form, it breaks from medieval sensibility in its insistence on the human ability to overcome, even exploit, fortune. The Decameron comprises a group of stories united by a frame story. As the frame narrative opens, 10 young people (seven women and three men) flee plague-stricken Florence to a delightful villa in nearby Fiesole. Each rules for a day and sets stipulations for the daily tales to be told by all participants, resulting in a collection of 100 pieces. Each day ends with a canzone (song), and some of these represent Boccaccio's finest poetry. Each daily collection of stories takes a different tone or theme. Day 1 consists of a witty discussion of human vices. On Day 2, fortune triumphs over its human playthings, but it is trounced by human will on Day 3. Day 4 is marked by tragic love stories. Day 5 brings happy endings to love that does not at first run smoothly. Wit and gaiety again reign on Day 6. Trickery, deceit, and often bawdy license run free on Days 7, 8, and 9. By Day 10, earlier themes are brought to a high pitch; the widely borrowed story "The Patient Griselda" closes the cycle of tales. It is generally acknowledged that Boccaccio borrowed many of the stories from folklore and myth, but the exquisite writing and sophisticated structure of the work make clear that its author was no mere anthologist. His prose influenced many Renaissance writers, and his tales themselves have been borrowed for centuries. While some critics attacked the work as vulgar and cynical, the author maintained an affirmation of moral values throughout even the most licentious passages. In its breadth of treatment of contemporary urban society-from humorous to tragic-as well as in its humanism and its swift and vivid narrative, it remained in the 21st century a remarkably fresh and penetrating document.