Justice Corrupted: How the Left Weaponized Our Legal System (Hardcover) 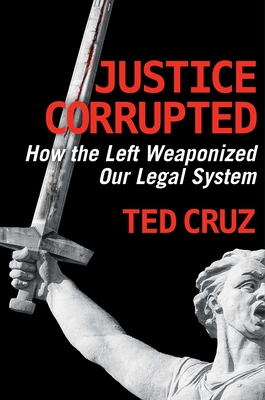 . . . with liberty and justice for some.

The left has corrupted the U.S. legal system. Wielding the law as a weapon, arrogant judges and lawless prosecutors are intimidating, silencing, and even imprisoning Americans who stand in the way of their radical agenda. Their "enemies list" even includes parents who dare to speak up for their children at school board meetings.

In this shocking new book, Senator Ted Cruz takes readers inside the justice system, showing how the wrong hands on the levers of power can strangle liberty, crush opposition, and wreck lives. The notion of a "Democratic" or "Republican" Department of Justice is outrageous. That institution should safeguard the Constitutional rights of all Americans. Justice Corrupted will equip patriots and lovers of liberty to hold their government accountable.

Senator Ted Cruz has dedicated his life to upholding the principles enshrined in our Constitution. After graduating from Harvard Law School, he clerked for Judge J. Michael Luttig of the Fourth Circuit and Chief Justice William Rehnquist of the U.S. Supreme Court. He served as an associate deputy attorney general under President George W. Bush and later as solicitor general of Texas, arguing nine cases before the Supreme Court. Elected to the Senate in 2012, he is a member of the Judiciary Committee. His previous book is One Vote Away: How a Single Supreme Court Seat Can Change History.