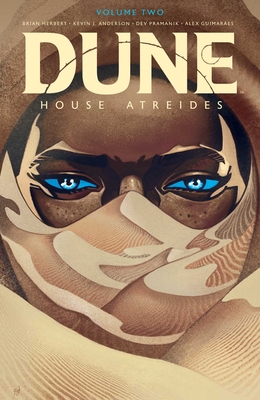 THE OFFICIAL PREQUEL TO THE GROUNDBREAKING DUNE CONTINUES... Leto Atreides brings news of the revolt brewing on Ix, but the city’s leaders make a decision that may threaten everyone, while Crown Prince Shaddam plots to overtake it. Meanwhile, Pardot Kynes begins spreading his edenic vision to terraform the desert planet of Dune into an oasis even as the native Fremen raise suspicions about his motives...and if he can truly accomplish his goals. The New York Times best-selling Dune: House Atreides comes to comics for the first time, adapted & scripted by Brian Herbert and Kevin J. Anderson, who co-wrote the eponymous prequel novel based on Dune creator Frank Herbert’s notes and illustrated by artist Dev Pramanik (Paradiso). Collects Dune: House Atreides #5-8.

Brian Patrick Herbert (born June 29, 1947) is an American author who lives in Washington state. He is the elder son of science fiction author Frank Herbert.

Brian Herbert's novels include Sidney's Comet, Prisoners of Arionn, Man of Two Worlds (written with his father), and Sudanna Sudanna. In 2003, Herbert wrote a biography of his father titled Dreamer of Dune: The Biography of Frank Herbert. The younger Herbert has edited The Songs of Muad'dib and the Notebooks of Frank Herbert's Dune. Brian has also created a concordance for the Dune universe based on his father's notes, though, according to the younger Herbert, there are no immediate plans to publish it.