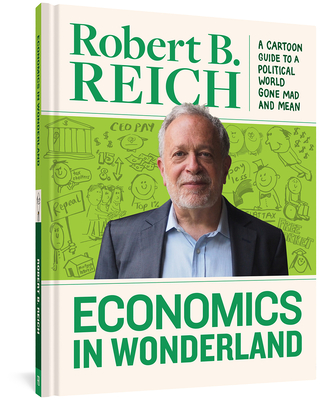 Cartoon essays by the champion of liberal values, and one of Time’s “Ten Most Effective Cabinet Secretaries of the Twentieth Century.”

Anyone who watches the former U.S. Secretary of Labor and The Daily Show and CNBC commentator's podcast, viewed on his Inequality Media website, has seen Reich's informal lectures on student debt, social security, and gerrymandering, which he accompanies by quickly drawing cartoons to illustrate his major points. Collected here, for the first time, are short essays, edited from his presentations, and Reich's clean-line, confident illustrations, created with a large sketchpad and magic marker. Economics in Wonderland clearly explains the consequences of the disastrous policies of global austerity with humor, insight, passion, and warmth, all of which are on vivid display in words and pictures.

Robert B. Reich is Chancellor’s Professor of Public Policy at the University of California at Berkeley and Senior Fellow at the Blum Center for Developing Economies. He served as Secretary of Labor in the Clinton administration. He has written the best sellers Aftershock, The Work of Nations, Beyond Outrage, and most recently, Saving Capitalism. He is also a founding editor of American Prospect magazine, chairman of Common Cause, a member of the American Academy of Arts and Sciences, and co-creator of the award-winning documentary, Inequality for All.