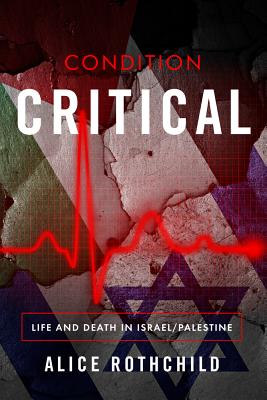 Since 2003, obstetrician Alice Rothchild has traveled annually to Israel/Palestine with other concerned Americans, to learn about health and human rights situation of politically marginalized communities, especially Palestinians. Condition Critical presents key blog posts and analytical essays that explore everyday life in Israel, East Jerusalem, the West Bank, and Gaza up close and with searing honesty. These eyewitness reports and intimate stories depict the critical condition of a region suffering from decades-old wounds of colonization and occupation. Condition Critical dares (and inspires) its readers to examine the painful consequences of Zionism and Israeli expansion and to bend the arc of the moral universe towards justice.

Alice Rothchild is a Boston-based physician, author, activist, and filmmaker. Recently retired from clinical medicine, she previously held the position of Assistant Professor of Obstetrics, Gynecology and Reproductive Biology in the Faculty of Medicine at Harvard University. She has written and lectured extensively on many topics including the health and human rights effects of the Israeli occupation of Palestine. Her previous publications include: On the Brink: Israel and Palestine on the Eve of the 2014 Gaza Invasion; Broken Promises, Broken Dreams: Stories of Jewish and Palestinian Trauma and Resilience, and the documentary film, Voices Across the Divide. She also contributed to the anthology Extraordinary Rendition: (American) Writers on Palestine.

"In Condition Critical Alice Rothchild grabs for the truth behind the lies, writing with extraordinary moral clarity and a sharp eye for the injustices, absurdities, and cruel historical ironies that define Palestinian life on both sides of the Green Line." —Ben Ehrenreich, author, The Way to the Spring: Life and Death in Palestine

"Prepare to enter the world of contemporary Israel/Palestine through the unsparing eyes of an informed and passionate observer—a respected US physician struggling to understand the lived realities of Jews and Palestinians caught up in a trap unlike any other on earth." —Jennifer Leaning, Director, Harvard FXB Center for Health and Human Rights

"Never – I repeat, never – have I encountered such a wondrous amalgam of innumerable personal stories, a wealth of information and data, systematic historic explanation, and perfectly articulated ethical-political thought. Alice Rothchild is one of those Jews who is in a 'special kind of exile,' criticizing Israel from a singular, insider, activist place. The three visits to Israel that she chronicles, ranging from June 2013 to March 2015, provide the narrative context for a literary trip that engages facts and ideology, individuals and organizations, towns, villages, cities, and refugee camps, the sweep of history and the present, current critical condition. And what about the future? Rothchild hints that we do not have the 'privilege of despair.' Still, read the book . . . and weep!" —Anat Biletzki, Albert Schweitzer Professor of Philosophy, Quinnipiac University; Professor of Philosophy, Tel Aviv University; Chair of the Board (2001-2006), B’Tselem, The Israeli Information Center for Human Rights in the Occupied Territories