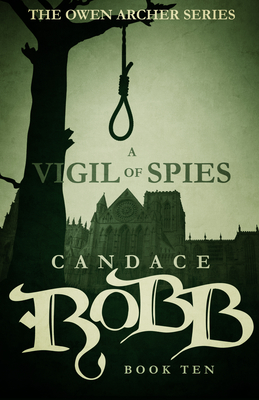 This is book number 10 in the Owen Archer series.

"As always, Candace Robb writes a powerful story intertwined with genuine characters of the day." --HISTORICAL NOVEL REVIEW Archbishop Thoresby of York, the second most powerful cleric in England, lies dying in his bed. The end of his life is seen by the great families of the North as a chance to promote one of their own as his successor, and Thoresby himself announces he will leave the matter to the dean and chapter of York. On the eve of this decision, the dying archbishop agrees to a visit from Joan, Princess of Wales, wife of the Black Prince, heir to the throne of England. Thoresby's captain of the guard, Owen Archer, has no doubt that trouble will follow. As soon as the company rides into the palace yard he is proved right: they arrive burdened with the body of one of their party, and Owen finds evidence that the man's death was no accident. Within days of this discovery, a courier carrying an urgent message for the archbishop is found hanging in the woods. With guards surrounding the property, it is clear that the murderer walks among the palace guests. The powerful Percy and Neville families are well represented in the entourage, including a woman who remembers an afternoon tryst with Owen as much, much more. Even the princess' son is suspect. As Owen races to unmask the guilty and rid the palace of the royal party, his final wish for his lord is that he might die in peace.