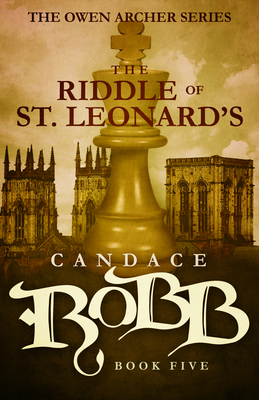 This is book number 5 in the Owen Archer series.

"Gripping and believable...you can almost smell the streets of 14th-century York as you delve deeper into an engrossing plot." --PRIMA In the year of our Lord 1369 the much-loved Queen Philippa lies dying in Windsor Castle, the harvest has failed, and the pestilence has returned. In York, the atmosphere of fear and superstition is heightened by a series of thefts and violent deaths at St. Leonard's Hospital, as well as rumors that these crimes are connected to the hospital's dwindling funds. The Master of St. Leonard's, Sir Richard Ravenser, hurries north from the queen's deathbed to summon Owen Archer, soldier-spy, to investigate the scandal before it ruins him. While his wife Lucie faces the plague-panicked townsfolk at the apothecary, Owen encounters a seemingly random series of clues: a riddle posed by one of the victims at the hospital, a lay sister with a scandalous past, the kidnapping of a child from the hospital orphanage, and a case of arson. The answer to the riddle of St. Leonard's lies in the past, and as Owen's family is caught up in the sweep of the pestilence, he must abandon them to race across the countryside to save the next victim.