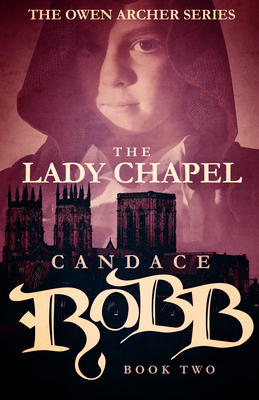 By Candace Robb
$14.99
On our shelves now at one or more of our stores

This is book number 2 in the Owen Archer series.

"A lovingly detailed background informs and animates the plot at every point." --KIRKUS Perfect for fans of both Ellis Peters and CJ Sansom, THE LADY CHAPEL is a vivid and immersive portrait of court intrigue and a testament to the power of the medieval guilds. Summer in the year of our Lord 1365. On the night after the Corpus Christi procession, a man is brutally murdered on the steps of York Minster. The next morning his severed hand is found in a room at the York Tavern--a room hastily vacated by a fellow guild member who had quarreled with the victim. Archbishop Thoresby calls on Owen Archer to investigate. As Owen tracks the fleeing merchant, he uncovers a conspiracy involving a powerful company of traders, but his only witness is a young boy who has gone into hiding, and his only suspect is a mysterious cloaked woman. When Owen discovers a link between the traders and a powerful coterie in the royal court, he brings his apothecary wife Lucie into the race to find the boy before he is silenced forever by the murderers.