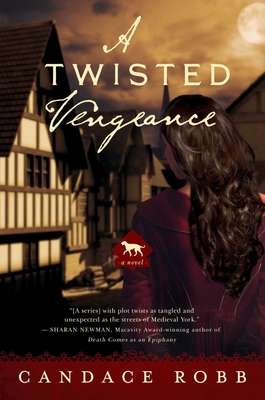 By Candace Robb
$25.95
Unavailable at this time.

As the fourteenth century comes to a close, York seethes on the brink of civil war—and young widow Kate Clifford, struggling to keep her businesses afloat, realizes that her mother is harboring a dangerous secret…

1399. York is preparing for civil war, teeming with knights and their armed retainers summoned for the city’s defense. Henry of Lancaster is rumored to have landed on the northeast coast of England, not so far from York, intent on reclaiming his inheritance—an inheritance which his cousin, King Richard, has declared forfeit.

With the city unsettled and rife with rumors, Eleanor Clifford’s abrupt return to York upon the mysterious death of her husband in Strasbourg is met with suspicion in the city. Her daughter Kate is determined to keep her distance, but it will not be easy—Eleanor has settled next door with the intention of establishing a house of beguines, or poor sisters. When one of the beguines is set upon in the night by an intruder, Kate knows that for the sake of her own reputation and the safety of her young wards she must investigate.

From the first, Eleanor is clearly frightened yet maintains a stubborn silence. The brutal murder of one of Eleanor’s servants leads Kate to suspect that her mother’s troubles have followed her from Strasbourg. Is she secretly involved in the political upheaval? When one of her wards is frightened by a too-curious stranger, Kate is desperate to draw her mother out of her silence before tragedy strikes her own household.

"Candace Robb’s latest absorbing and carefully detailed work of historical fiction is A Twisted Vengeance. Robb is a compelling writer, skilled in conjuring a feel for life back then—both the sweeping backdrop of history and the day-to-day workings of a household in that turbulent period."
— Seattle Times

"A historical mystery well worth your time with its satisfying, textured characters and hard-to-guess-where-it’s-all-going plot."
— Criminal Element

"Lovers of Shakespeare’s Richard II will find Robb’s intricate sequel to 2016’s The Service of the Dead a particular treat. Kate Clifford is compelling and finely drawn, and the answers to a series of mysteries are highly satisfying."
— Publishers Weekly (starred)

"A Twisted Vengeance will remind you of Shakespeare. A compelling female lead and solid historical details make this a satisfying read."
— Mystery Tribune

"As with Robb’s other books, this is rich in meticulous historical detail and vivid characters."
— Seattle Times [praise for the Kate Clifford series]

"The author’s research is evident in this book, as with her previous novels. Her knowledge of the time and place creates a strong foundation for an exciting and readable tale. Her characters are skillfully drawn, and the pacing is strategic. A very satisfying read."
— Historical Novels Review

"Robb’s deft hand creates a realistic political and commercial climate as King Richard II’s reign draws to a close in 1399, making this a satisfying historical read."
— Booklist [praise for the Kate Clifford series]

"The heroine's second adventure is most likely to appeal to fans of serious historical intrigue."
— Kirkus Reviews

"Robb is an ace at re-creating the medieval setting."
— Booklist