All for Nothing (Paperback) 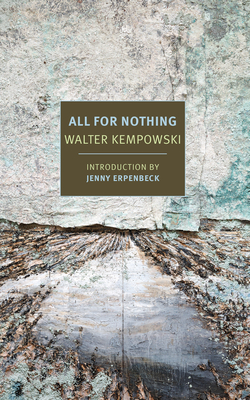 By Walter Kempowski, Anthea Bell (Translated by), Jenny Erpenbeck (Introduction by)
$16.95
On our shelves now at one or more of our stores

In January, 1945, East Prussia, refugees are afoot, trying to beat the advances of the Russian soldiers. Thousands of families pushing carts crammed with cherished belongings pass on the road in front of the insulated Georgenhof mansion of the Van Globig family. Eberhard, the father, is serving in the war in Italy, while his wife, Katharina, and 12 year-old son, Peter, live comfortably with their servants and unlimited supplies, seemingly oblivious to the approaching threat. Kempowski builds tension in the household so gradually that once their idyllic lives turn south, even the reader is surprised!

A wealthy family tries--and fails--to seal themselves off from the chaos of post-World War II life surrounding them in this stunning novel by one of Germany's most important post-war writers.

In East Prussia, January 1945, the German forces are in retreat and the Red Army is approaching. The von Globig family's manor house, the Georgenhof, is falling into disrepair. Auntie runs the estate as best she can since Eberhard von Globig, a special officer in the German army, went to war, leaving behind his beautiful but vague wife, Katharina, and her bookish twelve-year-old son, Peter. As the road fills with Germans fleeing the occupied territories, the Georgenhof begins to receive strange visitors--a Nazi violinist, a dissident painter, a Baltic baron, even a Jewish refugee. Yet in the main, life continues as banal, wondrous, and complicit as ever for the family, until their caution, their hedged bets, and their denial are answered by the wholly expected events they haven't allowed themselves to imagine.

All for Nothing, published in 2006, was the last novel by Walter Kempowski, one of postwar Germany's most acclaimed and popular writers.

Walter Kempowski (1929-2007) was born in Hamburg. During World War II, he was made to serve in a penalty unit of the Hitler Youth due to his association with the rebellious Swingjugend movement of jazz lovers, and he did not finish high school. After the war he settled in West Germany. On a 1948 visit to Rostock, his hometown, in East Germany, Walter, his brother Robert and their mother were arrested for espionage; a Soviet military tribunal sentenced him to twenty-five years in prison, of which he served eight at the notorious "Yellow Misery" prison in Bautzen. In 1957 he graduated high school. His first success as an author was the autobiographical novel Tadellöser & Wolff (1971), part of his acclaimed German Chronicle series of novels. In the 1980s he began work on an immense project, Echo Soundings, gathering firsthand accounts, diaries, letters, and memoirs of World War II, which he collated and curated into ten volumes published over twenty years, and which is considered a modern classic.

Jenny Erpenbeck was born in East Berlin in 1967. She is the author of several works of fiction, including The End of Days, which won the Hans Fallada Prize and the International Foreign Fiction Prize, and most recently, Go, Went, Gone. Erpenbeck lives in Berlin.

“I encountered one masterpiece this year—Walter Kempowski’s epic novel All for Nothing…What an amazing book this is: it was excitedly put into my hands by a writer friend, and I’ve been handing it on, in turn, to anyone who’ll listen to me….What’s remarkable is that Kempowski recounts this rave story almost in a spirit of lightness, with a slightly ironic distance and a quiet, steady humor…the result if a book at once searing and utterly unsentimental, a historical epic that doesn’t attempt to hide the fact that it is being written in the twenty-first century, decades after the events.” —James Wood, The New Yorker

"A crystalline translation by Anthea Bell...All for Nothing isn’t easily appropriated by any ideology. Kempowski’s sympathy for the suffering of his characters and his acknowledgment of the attendant destruction of their civilization are diffused by a fine-grained ambivalence...As a literary response to a long-buried collective trauma, All for Nothing is well worth reading..." —Corinna da Fonseca- Wollheim, The New York Times

"Memorable and monumental: a book to read alongside rival and compatriot Günter Grass's Tin Drum as a portrait of decline and fall." —Kirkus starred review
“All for Nothing is a beautiful, forgiving and compassionate book that looks beyond the futile divisions people make between themselves. It reaches its last devastating line with poetic sensibility and the grace of a classical tragedy, confirming Kempowski as a truly great writer.” —Carol Birch, The Guardian

“Beneath its apparently affectless façade, All for Nothing seethes with human drama, contradiction and complexity. No one is blameless; no one wholly unsympathetic. The result is an astonishing literary achievement.” —Toby Lichtig, The Telegraph


"Kempowski’s novel represents one of the culminating achievements of that postwar German self-reckoning, that political and literary renegotiation of the past that has produced important work by Heinrich Böll, Günter Grass, W. G. Sebald, and, lately, Erpenbeck herself. We know that such reckoning required a delicate calculus, 'beyond all political affiliation.' Sebald, in the lectures on the Allied bombing of German cities that he delivered in 1997 (later published under the title “On the Natural History of Destruction”), argued that the 'national humiliation felt by millions in the last years of the war' was the reason that 'no one, to the present day, has written the great German epic of the wartime and postwar periods.' A little less than a decade later, but too late for poor Sebald, Walter Kempowski beautifully proved him wrong." —James Wood, The New Yorker
“Kempowski’s idiosyncratic genius lies in his ability to weave this accumulation of human fallibility into something greater. His perspective on a grim slice of history steadily broadens out to become visionary, lending his novel the irresistible pull of great tragedy.” —The Economist

“Far more than a great German novel; Kempowski’s late masterwork is a universal tract which suggests that history can only present the facts; it is crafted stories such as this which enable us to grasp a sense of the vicious reality of war.” —Eileen Battersby, The Irish Times