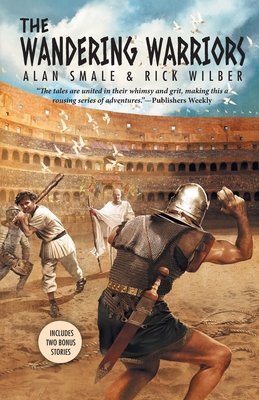 A Romp Through Time, Space, and Ancient Rome

The Romans-who actually played a game called "small ball"-put the captured team to work teaching baseball to the gladiators for a major Colosseum event...that turns into an over-the-top, life or death finale.

Baseball hijinks, a wild ride through Rome in a careening team bus, a hint of romance, and some viciously good hitting and fielding.

Will the Wandering Warriors make it home? Will the widowed empress escape the fate her evil son has in mind for her? Will the rattletrap team bus make it way through time and space (and Roman roads) back to Illinois?

Will Chicago White Sox owner Grace Comiskey show up to make an unlikely offer to the team's best player?

"Wilber and Smale (are) two literary tricksters who present for your reading pleasure a fantastical romp featuring two cultures nobody but Rick and Alan had ever thought to let clash: barnstorming baseball players and Imperial Romans. You will believe in doubleheaders in the Coliseum. You will marvel at gladiators flailing at curve balls. And you will be tickled by the historical celebrities who take part in America's ... um ... Rome's Pastime. Fun is hereby decreed."-James Patrick Kelly, winner of the Hugo, Nebula and Locus awards