Walking to the End of the World: A Thousand Miles on the Camino de Santiago (Paperback) 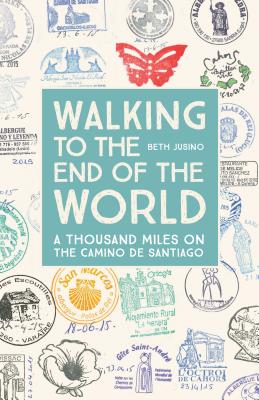 2020 Silver Independent Publisher Book Award in Travel - Essay In April 2015, Beth and Eric Jusino, laden with backpacks and nerves, walked out of a cathedral in the historic village of Le Puy, France, down a cobblestone street, and turned west. Seventy-nine days, a thousand miles, two countries, two mountain ranges, and three pairs of shoes later, they reached the Atlantic Ocean. More than two million pilgrims have walked the Way of Saint James, a long-distance hiking trail familiar to most Americans by its Spanish name, the Camino de Santiago. Each pilgrim has their own reason for undertaking the journey. For the Jusinos, it was about taking a break from the relentless pace of modern life and getting away from all their electronic devices. And how hard could it be, Beth reasoned, to walk twelve to fifteen miles a day, especially with the promise of real beds and local wine every night? Simple. It turned out to be harder than she thought. Beth is not an athlete, not into extreme adventures, and, she insists, not a risk-taker. She didn't speak a word of French when she set out, and her Spanish was atrocious. But she can tell a story. In Walking to the End of the World, she shares, with wry humor and infectious enthusiasm, the joys and travails of undertaking such a journey. She evocatively describes the terrain and the route's history, her fellow pilgrims, and the villages passed, and the unexpected challenges and charms of the experience. Beth's story is also about the assurance that an outdoor-based, boundary-stretching adventure is accessible to even the most unlikely of us. In her story, readers will feel that they, too, can get off their comfortable couches and do something unexpected and even spectacular. Walking to the End of the World is a warm-hearted and engaging story about an average couple going on an adventure together, tracing ancient paths first created in the tenth and eleventh centuries, paths that continue to inspire and reveal surprises to us today in the twenty-first.