Way Worst Than Attica: the 1980 Riot at the Penitentiary of New Mexico (Hardcover) 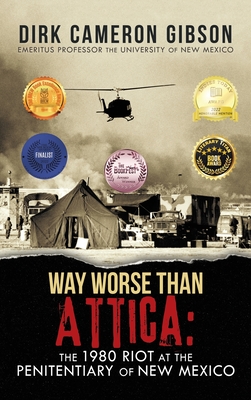 This book on the 1980 Penitentiary of New Mexico riot is by far the most comprehensive, best-researched and most credible publication on this topic. It examines the prison administration, the correctional officers and the inmates in great detail. Clues to the impending riot are documented, and the causes of the riot and contributing factors are discussed. The pre-riot, riot and post-riot stages of the event are covered. In addition to providing chapters on the negotiation about and investigation into the insurrection, the significance and consequences of the riot are assessed. Separate chapters discuss the families of the hostage correctional officers, the inmate families, the media and medical first responders. Tours of the prison are discussed, and paranormal aspects of the riot documented. There are ghosts in the prison This prison riot differed from most in that no inmates tried to escape. That is because this was not a traditional prison riot but rather one intended to initiate public and media awareness of terrible living conditions and to create public and media dialogue about inmate complaints. In the years immediately prior to the riot ACLU attorneys had submitted two Consent Decrees to federal courts, and the prison administration was forced to promise to address more than 200 inmate grievances. In fact they ignored the decrees and cracked down harder on the inmates. The inevitable result was the death of an unknown but undoubtedly significant number of inmates and countless serious injuries. The research foundation of this book is the most complete of any book about the riot. All published articles and books and blogs and government reports about the riot are included. Most significantly, interviews with correctional officers and family members provide intimate personal insight into the motives, madness and mutilations of this murderous riot.