American Injustice: Inside Stories from the Underbelly of the Criminal Justice System (Compact Disc) 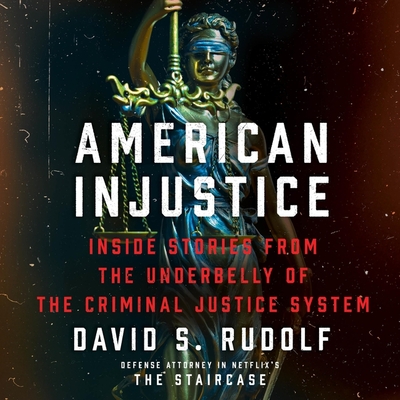 From the fearless defense attorney and civil rights lawyer who rose to fame with Netflix's The Staircase comes a stellar--and often shocking--report on a broken criminal justice system. (Kirkus, Starred Review)

In the past thirty years alone, more than 2,800 innocent American prisoners - their combined sentences surpassing 25,000 years - have been exonerated and freed after being condemned for crimes they did not commit. Terrifyingly, this number represents only a fraction of the actual number of persons wrongfully accused and convicted over the same period.

Renowned criminal defense and civil rights attorney David Rudolf has spent decades defending the wrongfully accused. In American Injustice, he draws from his years of experience in the American criminal legal system to shed light on the misconduct that exists at all levels of law enforcement and the tragic consequences that follow in its wake. Tracing these themes through the lens of some of his most important cases - including new details from the Michael Peterson trial made famous in The Staircase - Rudolf takes the reader inside crime scenes to examine forensic evidence left by perpetrators; revisits unsolved murders to detail how and why the true culprits were never prosecuted; reveals how confirmation bias leads police and prosecutors to employ tactics that make wrongful arrests and prosecutions more likely; and exposes how poverty and racism fundamentally distort the system.

In American Injustice, Rudolf gives a voice to those who have been the victim of wrongful accusations and shows in the starkest terms the human impact of legal wrongdoing. Effortlessly blending gripping true crime reporting and searing observations on civil rights in America, American Injustice takes readers behind the scenes of a justice system in desperate need of reform.