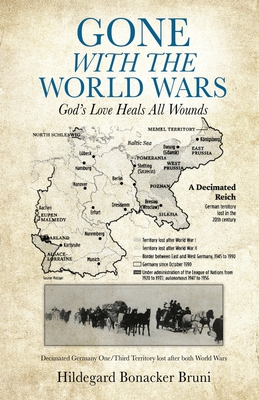 In the wake of World War II, one-third of East Germany, including East Prussia, was given to Poland and Russia with the consent of the four allies governing occupied Germany-America, England, France, and Russia. In the process, 14 million Germans who called that area home were driven from their land, receiving horrible treatment and never allowed to return. This is the story of one family's journey to safety and the miracles of God that lined their path to deliverance. In Gone with the World Wars, Hildegard Bonacker Bruni shares the inspiring true account of her family's incredible passage during and after World War II and the amazing faithfulness of God that protected them every step of the way. Hildegard shares the testimony of her parents, Gustav and Emilie Bonacker, who were born in East Prussia and lived through WWI and WWII. In July 1944, Gustav was drafted into the army, and in August of the same year, Emilie, along with seven of her children, had to escape on horse and buggy for eight months until she reached the refuge of Sophienhof, in Schleswig Holstein. By the grace of God, Hildegard's family survived, overcoming the life-threatening trials of hunger, sickness, freezing temperatures, and constant bomb attacks. Gone with the World Wars documents this brave family's experiences, which are representative of many German families during the time, revealing what they lived through both during and after the war. With her family's story as a reflection of what truly happened during World War II, Hildegard dedicated her life to uncovering the truth of both world wars, the historical background of each, and how the various types of government affected the lives of the German people, her family included. Join Hildegard on this unforgettable adventure through history to discover some of the most shocking unknown historical facts of World War II, God's incomparable goodness, and the European way of life that is gone with the world wars.