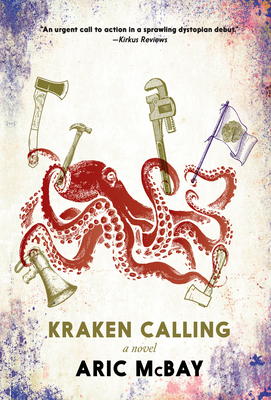 A sweeping near future dystopic fantasy in the Octavia Butlerian vein of the Parable of the Sower novels.


Political activist and anarchist author Aric McBay (Full Spectrum Resistance) toggles between the years 2028 and 2051 to give us the experience, with breathtaking realism, of what might happen in the span of just one generation to a society that is already on the brink of collapse.
In 2028 environmental activists hesitate to take the fight to the extreme of violent revolution. Twenty years later, with the natural environment now seriously degraded, the revolution is brought to the activists, rather than the other way around, by an authoritarian government willing to resort to violence, willing to let the majority suffer from hunger and poverty, in order to control its citizens when the government can no longer provide them with a decent quality of life.
So it is the activists who must defend their communities, their neighbors, through a more humane and in some ways more conservative status quo of care and moderation.
And the outcome here is determined by the actions of those who resist more than it is by the actions of the nominally powerful.

ARIC MCBAY is an organizer, a farmer, and author of four books, including, most recently Full Spectrum Resistance (2019), a two-volume guide to direct action. He writes and speaks about effective social movements, and has organized campaigns around prison justice, Indigenous solidarity, pipelines, unionization, and other causes. Kraken Calling is his first novel. You can find his work at www.aricmcbay.org.

“McBay’s passion combined with the tale’s escalating stakes and adrenaline-fueled conflict will reel in readers and hold them rapt.
An urgent call to action cloaked in a sprawling dystopian debut.”
—Kirkus Reviews

"Political and climate activist McBay makes his fiction debut with this dystopia exploring a resistance movement via two alternating time lines. In 2028, disparate activist groups both clash and collaborate in an attempt to stem the tides of climate change and fascism. In 2051, the failures of the previous generation have allowed a fascist pseudo-government to come to power, and an underground resistance is the only hope of ending the oppression of the York Emergency Authority and its “triage” system. . . With an almost instructional focus on the inner workings of political resistance, Kraken Calling is both a cautionary tale and an inspiring call to action that will appeal to left-leaning readers seeking to create social change." — Booklist