The Course of All Treasons: An Elizabethan Spy Mystery (Hardcover) 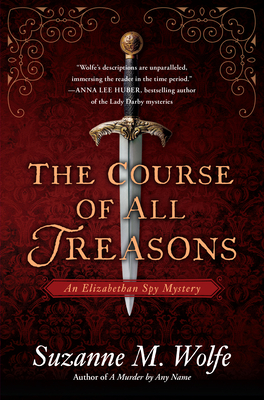 This is book number 2 in the An Elizabethan Spy Mystery series.

The Elizabethan court is beset by traitors at home and abroad as spies, rogues, and would-be usurpers of the throne vie for power.

England, 1586. Tensions rise as threats to the realm abound. Traitors are plotting for Mary Queen of Scots to depose Elizabeth I and take the throne. Rumors of a Spanish invasion by sea mount daily. And the body of one of Sir Francis Walsingham's agents is found floating in the Thames as other agents face enemies armed with crossbows and vials of poison.

Nicholas Holt, a spy in Walsingham's employ, narrowly averts the same fate while setting off in pursuit of the killer--or killers. And when he surprises a suspect in the company of a Spanish agent, he believes he's close not only to solving the case but preventing an act of high treason.

But soon, the attacks begin to threaten Nick's circle of friends. As those he loves face mortal peril, Nick must unravel the tangled plot, all the while steering a careful path through the fierce rivalry between Walsingham's agents and those of the Queen's favorite, the upstart Earl of Essex. Now it's a race to the breathless conclusion as Nick desperately searches for the answers that can save the day--and a vestige of loyalty that can save his own life.

Suzanne M. Wolfe grew up in England and read English Literature at Oxford University. Wolfe is the author of the novels, The Confessions of X, winner of Christianity Today's 2017 Book of the Year Award, and Unveiling. She lives in the Pacific Northwest.

Praise for The Course of All Treasons:
"Excellent...Wolfe vividly brings London to life...But the book’s greatest strength is its characters."
—Publishers Weekly, starred review

"Wolfe makes deft use of historical facts in an exciting mystery with a pleasing climactic surprise."
—Kirkus Reviews

“A complex story with multiple engaging characters...and readers won’t sleep or eat as they approach the denouement.”
—Historical Novels Society

Praise for A Murder By Any Name:
“Captivating…Fans of Fiona Buckley’s Ursula Blanchard and Kathy Lynn Emerson’s Rosamond Jaffrey will be delighted to add Wolfe to their reading lists.”
—Booklist

“[A] promising series launch… Fans of Elizabethan historicals will be satisfied.”
—Publishers Weekly

“An excellent series kickoff by Wolfe that cleverly highlights both the mystery and the many ills of Elizabethan times.”
—Kirkus Reviews

“In vivid passages, Suzanne Wolfe’s novel brings to the reader the light and dark of Elizabethan England, its squalor and splendor, filth and riches, intrigues and delights.”
—NY Journal of Books

"A fast-paced read that held my attention strongly throughout...Wolfe crafts a protagonist who is sympathetic as well as empathetic while retaining historical accuracy."
—Historical Novels Review