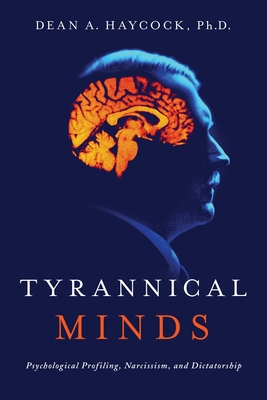 An incisive examination into the pairing of psychology and situation that creates despotic leaders from the author of Murderous Minds.

Not everyone can become a tyrant. It requires a particular confluence of events to gain absolute control over entire nations.

First, you must be born with the potential to develop brutal personality traits. Often, these are combined in “The Dark Triad” of malignant narcissism, Machiavellianism and psychopathy, as well as elements of paranoia, and an extraordinary ambition to achieve control over others.

Second, your predisposition to antisocial behavior must be developed and strengthened during childhood. You might suffer physical and/or psychological abuse, or grow up in trying times.

Finally, you must come of age when the political system of your country is unstable. Together, these events establish a basis for a rise to power, one that Joseph Stalin, Adolf Hitler, Mao Zedong, Saddam Hussein, and Muammar Qaddafi all used to gain life-and-death control over their countrymen and women. It is how Osama bin Laden and the leaders of the Islamic State hoped to gain such power.

Though these men lived in different times and places, and came from vastly different backgrounds, many of them felt respect for each other. They often seemed to recognize their shared, “dark” personality traits and viewed them as strengths. Only in rare cases did they show signs of mental disorders.

“Getting inside the heads” of foreign leaders and terrorists is one way governments try to understand, predict, and influence their actions. Psychological profiles can help us understand the urges of tyrants to dominate, subjugate, torture and slaughter.

Tyrannical Minds reveals how recognizing their psychological traits can provide insight into the motivations and actions of dangerous leaders, potentially allow to us predict their behavior?and even how to stop them. As strongmen and authoritarian leaders around the world increase in number, understanding the most extreme examples of tyrannical behavior should serve as a warning to anyone indifferent to the threats posed by political extremism.

Dean A. Haycock, PhD, is a science and medical writer, who earned a PhD in neurobiology from Brown University and studied at The Rockefeller University in the laboratory of Nobel Laureate Dr. Paul Greengard. He has been published in many science publications and is the author of Murderous Minds: Exploring the Criminal Psychopathic Brain and Characters on the Couch: Exploring Psychology Through Literature and Film along with several other books. He lives in New York.

"An interesting and fluent analysis of the president."
— The New York Times

"Haycock’s writing is clear and permeated with insight. A thoughtful and significant contribution to the art of psychologically profiling political leaders from afar."
— Publishers Weekly

"A compelling analysis of the mental processes of notable tyrants."
— Kirkus Reviews

"It is a volume of monumental importance that should be required reading for every citizen and beyond."
— Bandy X. Lee, M.D., MDiv., Assistant Clinical Professor, Yale School of Medicine

"Some books reward you with a deeper understanding of the world and of the people who threaten that world.  Tyrannical Minds is one of them."
— Charles C. Ouimet, Ph.D., Emeritus Professor and Faculty Scholar in Neuroscience, The Florida State University College of Medicine