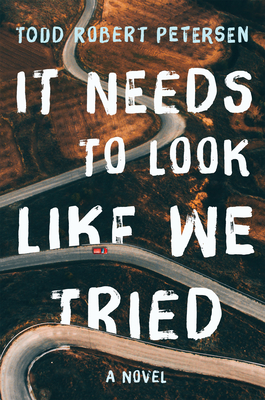 Todd Robert Petersen is crazy-talented, and the wild, weird, hilarious stories of It Needs to Look Like We Tried are just what's called for in these bizarre, frightening times. --Richard Russo, author of Empire Falls and Trajectory A domino chain of failures draws Todd Robert Petersen's characters together in these interconnected stories, despite hopes, dreams, and their best-laid plans Everyone has a dream, an idea, a goal. But what happens when those desires are thwarted, when dreams and goals fall apart? In It Needs to Look Like We Tried, Todd Robert Petersen explores the ways in which our failures work on the lives of others, weaving an intricate web of interconnected stories. A fastidious man takes a detour on the way to his father's wedding and kicks off a series of events that ricochets from the bride to her real estate clients; to a crazed former homeowner and his sister-in-law's reality TV lover; to a hoarding family whose lives are wrecked by their appearance on the second-rate show. Their daughter decides to escape the gravity of her tiny town with the help of her boyfriend who has a not-quite-legal plan to scrape together enough money to fund their departure. On their way across the country, these star-crossed lovers encounter our fastidious man, and the Rube Goldberg machine of life continues. Their fling has petered out, and they are driving home, whatever home is left after walking away from everything they abandoned months before.

Todd Robert Petersen grew up in Portland, Oregon, and now teaches film studies and creative writing at Southern Utah University. Petersen's previous books include Long After Dark, Rift, and It Needs to Look Like We Tried. He and his family live in Cedar City, Utah, on the western edge of the Markagunt Plateau.

Praise for It Needs to Look Like We Tried

"A disjointed Pulp Fiction-style narrative, hopscotching west of the Mississippi with a motley set of characters . . . The penultimate story, 'Providence,' is a gem . . . An engaging set of stories of broken lives, jagged in structure but smooth in the telling." —Kirkus Reviews

"Petersen’s stories sing with wise-cracking (a drug dealer on his business arrangements: “It’s an LLC, man. Corporations are people”), irresistible characters who make the best of a world filled with corruption and deception." —Publishers Weekly

"Todd Robert Petersen is crazy-talented, and the wild, weird, hilarious stories of It Needs to Look Like We Tried are just what's called for in these bizarre, frightening times." —Richard Russo, author of Empire Falls and Trajectory

"Todd Robert Petersen's It Needs to Look Like We Tried carves out narrative space in the gaps of our lives, the moments we don't often get to see, and the result is deliriously good, substantial in the best way, characters both broken and earnest, a reflection of the best and worst in ourselves." —J. Aaron Sanders, author of Speakers Of The Dead

"Everybody in Todd Robert Petersen's edgy linked collection hopes their luck will hold. Every choice they make is the right one…for ten minutes. These stories start out easily, and a wildness creeps into each one. One character says, 'No one starts out thinking they are going to jail.' These stories brim with folks who think there is almost enough distance between towns to consider new lives. Almost. It Needs to Look Like We Tried is a smart book about what people choose and what inevitably claims them." —Ron Carlson, author of The Signal and A Kind of Flying

"In It Needs to Look Like We Tried, Todd Robert Petersen uses the tools of the novel (big picture, complex vision) and the short story (close observation, light touch) to present us with a wide-ranging world of intermingled lives. It's something of a road trip, too—one you'll be glad you took." —Jon Clinch, author of Finn and Kings Of The Earth

Praise for Long After Dark

"Petersen [explores] the contemporary Mormon experience with an openness too few of his contemporaries risk. The characters' woes range from the simple to the profound, but Petersen examines them all with honest, compassionate and clear-eyed prose, allowing his characters to stumble and doubt as they attempt to reconcile their failings with their faith… a powerful testimony that defies easy categorization." —Salt Lake City Weekly

"In his first novel, the Utah transplant has created an iconic mormon Character almost immediately recognizable to churchgoeers. It just goes to show that sometimes the most acute observers are those who see things from the outside." —The Salt Lake Tribune

"What a pleasure to read the work of a writer who understands and can accurately portray the small, out-of-the-way parts of this world where honor, generosity and sheer cussedness are still operative principles. With Rift, Todd Petersen has written a funny and tough-minded account of a place where family, faith and community still come first." —Brady Udall, author of The Lonely Polygamist and The Miracle Life of Edgar Mint

"Todd Petersen is a master at capturing small, authentic human moments....In drawing characters, Petersen is both unflinchingly honest and compassionate; in drawing western landscapes, he's got an eye for original detail. A natural storyteller, a native son, his is a reliable pen when it comes to capturing the true contemporary West in fiction." —Ann Cummins, author of Yellowcake and Red Ant House

"Attention readers of literary fiction: a stunning and richly imagined character has entered our congregation. Jens Thorsen, protagonist of Todd Robert Petersen's striking debut novel, is an aging patriarch and incurable curmudgeon--strong, wise, and ornery. Interestingly flawed and utterly irresistible..." —Aaron Gwyn, author of Wynne's War and The World Beneath