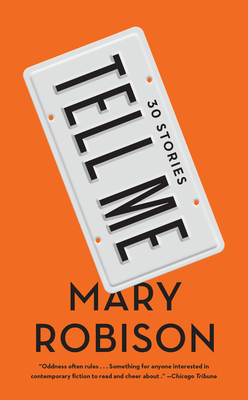 By Mary Robison
$16.95
On our shelves now at one or more of our stores

"Robison has a poet's eye for the unconscious surrealism of commercial America." --The New York Times Book Review Tell Me reflects the early brilliance as well as the fulfilled promise of Mary Robison's literary career. In these stories--most of which appeared in The New Yorker throughout the eighties--we enter her sly world of plotters, absconders, ponderers, and pontificators. Robison's characters have chips on their shoulders; they talk back to us in language that is edgy and nervy; they say "all right" and "okay" often, not because they consent, but because nothing counts. Still, there are small victories here, small only because, as Robison precisely documents, larger victories are impossible. Here then, among others, is "Pretty Ice," chosen by Richard Ford for The Granta Book of American Short Stories, "Coach," chosen for Best American Short Stories, "I Get By," an O. Henry Prize Stories selection, and "Happy Boy, Allen," a Pushcart Prize Stories selection. These stories--sharp, cool, and astringently funny--confirm Mary Robison's place as one of our most original writers and led Richard Yates to comment, "Robison writes like an avenging angel, and I think she may be a genius." "Mary Robison's short stories are short, subtle, and substantial... her ironic sense of detail bursts from every sentence." --Vogue "Word for fucking word, her work demands our attention." --David Leavitt, The Village Voice

Mary Robison was born in Washington, D.C. She is the recipient of a Guggenheim Fellowship, two Pushcart Prizes, an O. Henry Award, the Los Angeles Times Book Prize for Fiction, and the 2018 Arts and Letters Award in Literature. She is the author of four novels and four story collections. She lives in Gainesville, Florida.

"Thirty precision-built short stories old and new by a writer who extracts a maximum of meaning and feeling from a minimum of words make for a thrilling collection. Robison's stories… come at the reader from oblique angles, skittering like a leaf in the wind until, suddenly, everything begins to make quirky but gratifying sense. A deft conjurer of place, Robison is most intrigued with the telegraphic dialogue with which annoyed but loving family members communicate with each other and with the oddball configurations the concept of family can yield. Like Ann Beattie, Robison neatly exposes the pathos beneath the placid veneer of middle-class life, the seeds of chaos in seemingly orderly existences, and finds sweet humor and bemused hope in our stubborn quest for security, even happiness." —Donna Seaman, Booklist

"Robison's talent for observation makes for microscopic wonders of details: the menu items at a cheap diner in Providence, R.I.; the furnishings of a Laundromat, and the text of gift-wrap stickers ("Grin and Ignore It," "Things Are Getting Worse—Send Chocolate!"), in small-town Ohio." —Chicago Tribune

"Mary Robison's stories are infused with a quiet menace. The trick of her writing is the way she uses the reader's own expectations to create that sense of unease. Her stories—published over the years in The New Yorker and now collected in Tell Me—are made of handfuls of moments, put together without benefit of the usual revelatory short story structure… Robison is the rare minimalist whose bare-bones fiction is actually a pleasure to read." —Claire Dederer, author of Poser: My Life in Twenty-Three Yoga Poses

"There is much to be gained from her lean, deeply felt fiction. Bearing as her told the best ear for English since James, a sense of pacing that is nothing less than perfect, and an intensely accurate feel for American life." —David Leavitt, author of The Two Hotel Francforts

"Robison has a poet's eye for the unconscious surrealism of commercial America… And she has a playwright's ear for American speech, the things one hears people say all the time but rarely sees written down." —Katha Pollitt, The New York Times Book Review

"Robison is a master of line and texture who gets maximum information out of the glittering and intentionally deceptive surfaces of our image-dominated culture. Robison raises sitcom wit to the level of real emotional situations, real comedy as real art." —Joseph Coates, Chicago Tribune

"There isn't a writer working today who sees the works, or hears it, or tastes it, or inhabits it more fearlessly than Mary Robison." —Frederick Barthelme, author of There Must Be Some Mistake

Praise for Why Did I Ever

Winner of the LA Times Book Prize for fiction in 2001

"Mary Robison, almost as an afterthought, has created a novel that speaks volumes about life in Los Angeles: its stopping and starting, its rushing and emoting, its whimsy and its suspicious, subversive humor…" —Los Angeles Times Book Review

"An epic portrayed in miniature, a cry of cosmic pain in a voice of absurdist humor, an earnest insistence on maternal love in the language of skepticism and family dysfunction. It's an amazing little book: all of Robison's minimalist genius is at work here." —Cathleen Schine, New York Times Book Review

"I wish to hell I could write prose like this...The joy in this novel is for the reader, not the characters. Read it." —David Gates, Newsweek

"The author, who is known as a minimalist, here creates a narrative out of fragmented paragraphs, and the book works best when she strips Money's most explicit fears away. A simple sentence fragment—'Canoe, moon, ukelele'—seems a close to perfect expression of lost beauty." —The New Yorker

"Robison's characters are vivid, colorful, and likable, and their story is absorbing. Her humorous presentation does not cheapen the tragic content of her novel but realistically portrays one method of survival. Highly recommended." —Library Journal

"Robison's incandescent soliloquy on the absurdity of existence hones fiction to a new and exhilarating measure of sharpness." —Donna Seaman, Booklist

"[A] tour de force of minimalist yet mind-expanding prose… [Robison] makes you think—hard—about life's unavoidable travails, while making it impossible for you to suppress a smile." —Lisa Shea, Elle

"What makes Money memorable, and Mary Robison essential, is that her fundamental bearings are the right ones. Love and compassion are her nature, and they suffuse the page whenever she is talking about her children, even the exasperating daughter." —Richard Dyer, Boston Globe

"Why Did I Ever is a rarity: an experimental novel that's both engaging and wholly successful." —Time Out New York

"Robison… possesses a precocious alertness to the incongruities of life…. [A]t the center is a disciplined and clear-headed novel full of humor and an occasional glimmer of optimism." —Rob Stout, The Charlotte Observer

"I wish to live in [Money's] mind for a while because it's perilously funny pratfalls make me want to laugh so badly that I cannot laugh at all." —Molly McQuade, Newsday

"At once heartwrenching and bitterly comical… a stunning work of unbridled honesty." —The Village Voice

"It is a rare novel that can manage to convey the coexistence of tragedy and pleasure so immediately without lessening the reader's enjoyment of either." —The New Leader

"While Money is the definition of sad insanity, Robison's voice is witty and cutting, albeit undeniably weird…. It's more than worth the ride." —Entertainment Weekly

"Robison's fiercely offhand banter cuts through any possible cavity of bullshit… Each passage assumes the feel of veracity of idea over unnecessary execution, as if we are being shown the tools that build a universe rather than the universe itself… Everything is treasure. And by the sheer mass of its weight in such small space, the reader is forced to slow down, to hear the lines again inside her head instead of only on the page, and to parse what those lines might be trying to communicate, if anything." —Blake Butler, Vice

"Mary Robison is, and always has been, a wonderful writer. Why Did I Ever is startling, deft, extremely attractive, and smart—very smart—in its midnight vision of the lived life." —Richard Ford

"Mary Robison has done for the Hollywood culture of our time what Joan Didion did thirty years ago. Spare and ruthless, precisely chiseled, Why Did I Ever is the Play It As It Lays of the twenty-first century." —Madison Smart Bell, author of All Souls' Rising

"Mary Robison's stunned and plunging characters are the truth. This is pure, grim poetry." —Barry Hannah, author of High Lonesome

"Deeply strange, hilarious, heartbreaking, and just stupidly great…. Robison is something approaching brilliant, and Why Did I Ever is hard-bound proof." —Darcy Cosper, author of Wedding Season

Praise for Beleive Them

"Sorrow and pain are underground messages in these finely made stories...Robison uses a minimalist discipline and barely ruffled surfaces, but her hidden pictures of childhood and other states of vulnerability can be boundless in their emotion." —Richard Eder, Los Angeles Times Book Review

"Robison's methods allow the careful reader an honest perspective into lives usually dealt with either melodramatically or contemptuously by other authors." —Larry McCaffery, The New York Times Book Review

Praise for An Amateur's Guide to the Night "Like Raymond Carver and Ann Beattie, whose fictional territory closely resembles her own, Miss Robinson has achieved in one novel and two short story collections a style perfectly adapted to delineating these attenuated lives." —Michiko Kakutani, The New York Times

"No American short-story writer speaks to our time more urgently or fondly than Robison. Word for fucking word, her work demands our attention." —David Leavitt, The Village Voice

"The writing is cool and detached, controlling a breathtaking compassion… An intimate, enriching experience." —The San Francisco Chronicle

"There is an almost incredible purity of line and texture in these stories. Every phrase is lucid, every character comes alive, and every sentence suggests a calm, wise, heartbroken version of the world. Robison writes like an avenging angel, and I think she may be a genius." —Richard Yates

"These are not stories so much as splinters of contemporary life, set under a microscope...there is humor here, as well as deadpan exactitude… Mary Robison's style at its best is stripped, incisive, clear as a piece of glass held up the the light." —Ann Tyler