Wonderdog: The Science of Dogs and Their Unique Friendship with Humans (Hardcover) 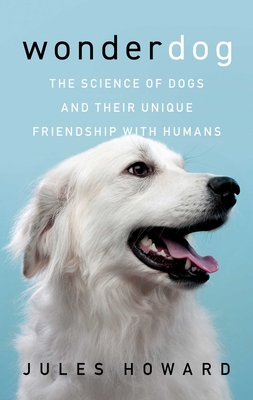 A celebration of dogs, the scientists who've lived alongside them, and how canines have been key to advancements in science for the betterment of all species.

Almost everywhere there are humans on planet Earth, there are dogs. But what do dogs know and understand of the world? Do their emotions feel like our own? Do they love like we do? What do they think of us?

Since our alliance first began on the hunt and on the farm, our relationship with dogs has evolved considerably. And with domestic dog population rising twenty per cent in the last decade alone, it is a bond that will continue to evolve. In order to gauge where our relationship with dogs goes from here, author and zoologist Jules Howard takes a look at the historical paths we have trod together, and at the many scientists before him who turned their analytic eye on their own four-legged companions.

Charles Darwin and his contemporaries toyed with dog sign language and made special puzzle boxes and elaborate sniff tests using old socks. Later, the same questions drove Pavlov and Pasteur to unspeakable cruelty in their search for knowledge. Since then, leagues of psychologists and animal behaviourists have built upon the study of dogs and their much-improved methods have fetched increasingly important results: dogs have episodic memory similar to ours; they recognise themselves as individuals; and, in addition to their expert sense of smell, dogs’ noses can even detect thermal radiation.

With the help of vets, ethologists, neurologists, historians and, naturally, his own dogs, Wonderdog reveals the study of dogs to be key in the advancement of compassion in scientific research, and crucial to making life on Earth better for all species.

Jules Howard is a wildlife expert, zoology correspondent, science-writer and broadcaster. He writes regularly for many publications, including the Guardian, and appears regularly on television in the United Kingdom. He is the author of several nonfiction books for both adults and children and lives in London.

"Wonderdog succeeds in drawing readers in and delivering reliable scientific information packaged in compelling and sometimes heart-warming anecdotes. I have no doubt that even the science-phobic among dog lovers can find Wonderdog exhilarating."

"A solid study on man’s best friend that can be enjoyed by the casual reader or the historian alike, with an exceptional balance of entertainment and educational value."

"Wonderdog is a paean to these clever, flexible, charming animals who sit and walk alongside us -- and also a humane, thoughtful consideration of the science using and about dogs. You'll want to read it with a dog by your side, so you can regularly turn to them admiringly and tickle their ears."


— Alexandra Horowitz, #1 New York Times bestseller author fo Inside of a Dog: What Dogs See, Smell, and Know and Being a Dog: Following the Dog into a World of Smell.

"A fresh and vibrant account of what we’ve learned about dogs from Darwin to today. With a cast of familiar and almost-forgotten characters, Wonderdog tells us why dogs do the things they do – and what it tells us about ourselves. Full of compassion and intrigue, this is scientific storytelling at its very best."
— Zazie Todd, PhD, award-winning author of Wag: The Science of Making Your Dog Happy

"Zoologist Howard (Death on Earth) enlists the help of veterinary professionals, psychologists, ethologists, neurologists, historians, and others in this eclectic history of dogs....Howard peppers in charming stories of his own childhood dog, Biff, giving the survey equal parts heft and heart: 'We had all the hallmarks of love for one another, Biff and I.' This is just the thing for dog lovers."
— Publishers Weekly

"Jules Howard's Wonderdog is a wonderful, fact-filled, and easy-to-read journey into the heads and hearts of dogs--who they are, what they know, and what they feel. It's essential to know and respect how these fascinating animals sense their worlds so that we can help them adapt to ours--so they can get all they need as they negotiate a human-oriented world. Howard does a masterful job blending the latest science with doses of common sense as he  covers what we know and still need to know to give dogs the best lives possible. Wonderdog is a must-read."
— Marc Bekoff, University of Colorado, author of Canine Confidential: Why Dogs Do What They Do

"With Wonderdog, Jules Howard explores the highs and the lows of science's sometimes troubled relationship with the domesticated wolf with which we share our homes and lives. With his characteristic lightness of touch, Howard takes us on a journey of discovery that will leave no dog-lover unmoved, and no dog-hater unconverted. A splendid, entertaining and hugely informative read!"
— Adam Hart, author of Unfit for Purpose: When Human Evolution Collides with the Modern World

"A wonderful book! I loved it. Informative and engaging."
— Virginia Morell, American science writer, contributor to National Geographic and Science, and author of Animal Wise: How We Know Animals Think and Feel

"Wonderdog offers readers a whirlwind tour of 150 years of research on the minds and behavior of man’s best friend. From Darwin and Pavlov to the latest research in canine science, Wonderdog reflects first-rate scholarship yet reads like a detective novel. This book puts Jules Howard in the top ranks of contemporary science writers."


— Hal Herzog, author of Some We Love, Some We Hate, Some We Eat: Why It’s So Hard to Think Straight About Animals

"Turning wolves into dogs took knowledge, insight and a few cheeky treats along the way. This book contains all three, and is the perfect companion to any dog lover."
— Ben Garrod, Evolutionary Biologist and Conservationist