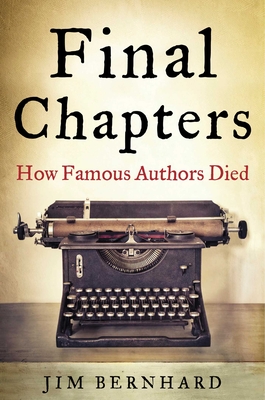 By Jim Bernhard
$14.99
Unavailable at this time.

“Everybody has got to die, but I have always believed an exception would be made in my case.” –William Saroyan, Pulitzer Prize–winning author

Famous authors, like everybody else, know that one day they will die. Final Chapters tells the fascinating stories of more than one hundred writers’ encounters with death—and their attitudes toward the Grim Reaper: fear, uncertainty, or acceptance.

Francis Bacon wrote, “It is as natural to die as to be born,” while Socrates told the judges who condemned him, “And now we go our ways, I to die and you to live. Which is better is known to God alone.”

Death often came in startling ways for these well-known writers. The playwright Aeschylus was conked by a turtle falling from the sky. Christopher Marlowe was stabbed in a barroom brawl. Molière collapsed while playing the role of a hypochondriac in one of his plays.

Edgar Allan Poe was found semicomatose in someone else’s clothes shortly before he died. Sherwood Anderson was felled by a toothpick in a martini. Did Dylan Thomas really die of eighteen straight whiskeys? And was it a bottle cap or murder that did in Tennessee Williams?

If these authors have lessons for us, the best may be that of Marcus Aurelius: “Death smiles at us all; all we can do is smile back.”

Jim Bernhard is the author of Puns, Puzzles, and Word Play: Fun and Games for Language Lovers; Porcupine, Picayune, & Post: How Newspapers Get Their Names; and, with his wife, Virginia, Life Is NOT a Dress Rehearsal: 10 Lists to Make Before Your Final Exit. He has an MA in English literature from the University of Birmingham in England, where he was a Marshall Scholar, and a BA from Rice University. Bernhard is also a playwright, lyricist, actor, theatrical manager, and crossword puzzle constructor. He resides in Houston, Texas.