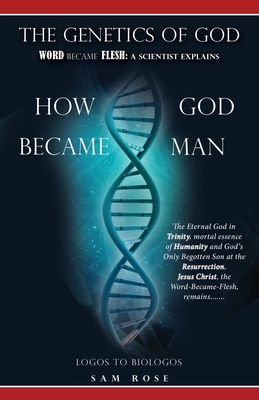 Have you ever been confronted with the questions, Can God become a man? Is not incarnation a violation of the natural law? The Christian says incarnation is the pulsating beat of the heart of Christianity and that God became a man, yet the formidable question is, how? Has theology or science found a solution? The historical Jesus of Nazareth is arguably the most influential person ever to walk on the face of the planet Earth. For the past 2000 years, thousands of books have been written about Him, and yet, no book has been written about the mechanism by which the eternally existing God - the Christ - became Jesus, the Man in the Flesh. This book precisely explains this mystery by looking through the prism of the scientific discipline of genetics.

In this book, you will:

●Discover how science (genetics) has already shown what the Scriptures have promised.

●Gain scientific understanding about how God became a man.

●Understand the scientific basis for the phrase, "Word Became Flesh."

●Acquire scientific knowledge that will revitalize your spiritual life and empower you to defend your faith.

Sam Rose is a former senior post-doctoral research scientist at Columbia University, New York and a research fellow at Rutgers University, New Jersey (University of Medicine and Dentistry of New Jersey). He spent more than fifteen years studying the intricacies of the immune system. His genetic research has focused on the role of HLA (Human Leukocyte Antigen) genes in human autoimmune diseases and HIV/AIDS. In 2000 he was struck by an insidious illness and confronted by the last visitor, but God preserved him for a unique purpose. Since then, he has been examining the relevance of science (genetics) and theology with particular emphasis on Christianity. After 18 years of clinical trials, he lives to tell one of the greatest mysteries God has revealed to mankind. He holds a Ph.D. in Immunogenetics from AIIMS (All India Inst of Med Sciences, New Delhi India). He is the Founder and President of Incarnate Word International. He lives with his wife Shelonitda Rose and children.