Chief Seattle and the Town That Took His Name: The Change of Worlds for the Native People and Settlers on Puget Sound (Paperback) 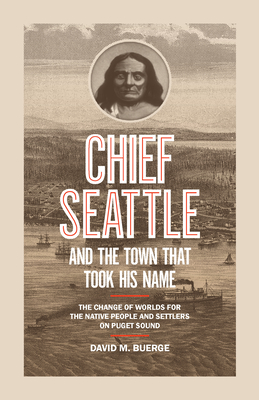 This is the first thorough historical account of Chief Seattle and his times--the story of a half-century of tremendous flux, turmoil, and violence, during which a native American war leader became an advocate for peace and strove to create a successful hybrid racial community.

When the British, Spanish, and then Americans arrived in the Pacific Northwest, it may have appeared to them as an untamed wilderness. In fact, it was a fully settled and populated land. Chief Seattle was a powerful representative from this very ancient world. Historian David Buerge has been researching and writing this book about the world of Chief Seattle for the past 20 years. Buerge has threaded together disparate accounts of the time from the 1780s to the 1860s--including native oral histories, Hudson Bay Company records, pioneer diaries, French Catholic church records, and historic newspaper reporting. Chief Seattle had gained power and prominence on Puget Sound as a war leader, but the arrival of American settlers caused him to reconsider his actions. He came to embrace white settlement and, following traditional native practice, encouraged intermarriage between native people and the settlers, offering his own daughter and granddaughters as brides, in the hopes that both peoples would prosper. Included in this account are the treaty signings that would remove the natives from their historic lands, the roles of such figures as Governor Isaac Stevens, Chiefs Leschi and Patkanim, the Battle at Seattle that threatened the existence of the settlement, and the controversial Chief Seattle speech that haunts to this day the city that bears his name.

DAVID M. BUERGE has been a teacher, historian, and writer. He is an alum of the University of Washington and the Peace Corps. While teaching in the 1970s, he began researching and writing about northwestern prehistory and began writing for local, regional, and national publications. He also became acquainted with the Duwamish tribe and became a student of their history. Buerge has published fourteen books of history and biography.

"This book, the first full biography of Seattle’s namesake, was a yearslong work of devotion by Buerge, a Seattle historian. It tells both the chief’s story and the tragic history of Native Americans at the early years of Seattle’s settlement by whites, and resurrects the life of a determined leader who never failed to keep his people’s welfare in his sights. A classic work of Seattle history."
--Mary Ann Gwinn, The Seattle Times

“In one of the many magical, epic moments in this enchanting book, Chief Seattle is depicted shouting regally from his canoe, "It is I, Seattle!" And here he is, at last, full of majesty, complexity, wisdom, and charisma. The book is an act of justice, finally bringing to life the man to whom the city owes its name and its multiracial founding.”
—David Brewster, president of Folio: The Seattle Athenaeum

“This is the Seattle book we’ve been waiting for. Dave Buerge finally puts flesh on the bones of Seattle’s namesake, cutting through myth to give us the man in all his glory and complexity. More than a city’s namesake, Chief Seattle was our city’s key visionary and cofounder, and he remains a voice of conscience. Chief Seattle and the Town That Took His Name is a foundational work for anyone who wants to understand the city and the roots from which it grows.”
—Knute Berger, Crosscut and Seattle magazine columnist

“The man known to so many as Chief Seattle has deserved a proper biography for a long, long time. This book, based on years of painstaking research, is a window not only into the life of one important Indigenous leader, but into the birth of the Northwest’s premier metropolis. A must-read for anyone interested in Seattle history.”
—Coll Thrush, author of Native Seattle: Histories from the Crossing-Over Place

“This portrait could redefine the origins of Seattle for a generation.”
—Seattle Weekly

“[A] remarkably thorough account of the history of Puget Sound and the influential role Chief Seattle played in its early growth...Buerge’s study is a valuable and erudite portrayal of this influential chief and the tumultuous times in which he led his people amidst the onslaught of manifest destiny.”
—Booklist

"A thoroughly researched, insightful and at times heartbreaking book."
—The Seattle Times

“A thorough history and enduring legacy of the Native American chief. A Peak Pick!”
—Shelf Talk

"Buerge’s new book not only delves into the details of Chief Seattle’s life, but also places those events in the context of the rapid change that was overwhelming the Puget Sound area."
—The Daily (University of Washington)

"With this book Chief Seattle gets maybe his first shot at a full and fair examination of his legacy since the first white settlers showed up. That makes this a significant moment in Seattle history."
—Seattle Review of Books