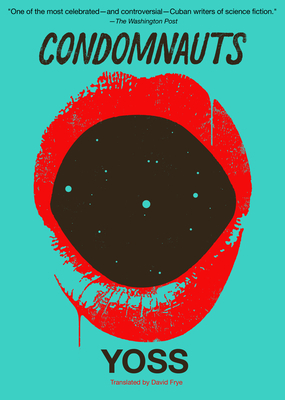 By Yoss, David Frye (Translated by)
Unavailable at this time.
Unavailable

“Yoss (Super Extra Grande) is an eminent Cuban SF writer who also fronts a heavy metal band; his iconoclastic spirit and rock-and-roll aesthetic are on full ingenious display in this daring, rollicking, and joyous novel…. This extended dirty joke is also an impressive science fiction novel with much to say about sex, culture, and what it means to be alien.”  —Publishers Weekly, Starred Review

In the 24th century, Josué Valdés’ rise from an orphan in the slums of Rubble City, Cuba to one of the galaxy’s most accomplished explorers was nothing short of meteoric. On the streets, Josue raced cockroaches for cash—until he discovered his true-calling: as a sexual ambassador for humanity and the Nu Barsa colony.

Every so-called “condomnaut” knows that diplomacy and trade deals depend on sexual pacts in the galactic community—and every encounter becomes a close encounter. While some condomnauts have been raised and genetically enhanced to meet the needs of any tentacled insectoid in the galaxy, Josué is a natural whose ego could eclipse the big dipper. Our intrepid condomnauts travel light years across the galaxy and discover that old rivalries—and prejudices—are never far behind. When the first extragalactic beings arrive in the Milky Way, and with them the potential to negotiate for extraordinary new technologies, Josué must call upon every ounce of his talent to seal the deal for his colony and all of humanity.

Indirectly investigating current sexual mores, Cuban science fiction rock star Yoss plays upon stereotypes while making it clear that under Communist Cuba what is daring is not always funny and vice versa. Following the success of Super Extra Grande and A Planet for Rent, Yoss brings us another uproarious space adventure with Condomnauts, a wildly inventive and unapologetic tale that would make even Barbarella blush.

Born José Miguel Sánchez Gómez, Yoss assumed his pen name in 1988, when he won the Premio David in the science fiction category for Timshel. Together with his peculiar pseudonym, the author's aesthetic of an impentinent rocker has allowed him to stand out amongst his fellow Cuban writers. Earning a degree in Biology in 1991, he went on to graduate from the first ever course on Narrative Techniques at the Onelio Jorge Cardoso Center of Literary Training, in the year 1999. Today, Yoss writes both realistic and science fiction works. Alongside these novels, the author produces essays, reviews, and compilations, and actively promotes the Cuban science fiction literary workshops, Espiral and Espacio Abierto.

When he isn’t translating, David Frye teaches Latin American culture and society at the University of Michigan. Translations include First New Chronicle and Good Government by Guaman Poma de Ayala (Peru, 1615); The Mangy Parrot by José Joaquín Fernandez de Lizardi (Mexico, 1816), for which he received a National Endowment for the Arts Fellowship; Writing Across Cultures: Narrative Transculturation in Latin America by Ángel Rama (Uruguay, 1982); and several Cuban and Spanish novels and poems.

“Yoss (Super Extra Grande) is an eminent Cuban SF writer who also fronts a heavy metal band; his iconoclastic spirit and rock-and-roll aesthetic are on full ingenious display in this daring, rollicking, and joyous novel…. The novel is recognizable as a space opera, but everything from human history to the economics of galactic trade is seen from a richly irreverent angle. Josué is a three-dimensional, well-rounded protagonist whose flaws can be genuinely aggravating without overwhelming his natural charm. When hilarity ensues, as it often does, the laughs are earned and heartfelt. This extended dirty joke is also an impressive science fiction novel with much to say about sex, culture, and what it means to be alien.”
— Publishers Weekly, Starred Review

“Yoss (A Planet for Rent, Super Extra Grande) is Cuba’s most celebrated contemporary science fiction author, and we’re delighted another one of his gonzo works has been translated into English.”
— Jeff Somers

“The book pays off in a climax that a well-trained Condomnaut would be proud of. What I loved about Condomnauts isn’t just its unusual structure or how Yoss (mostly) avoids the obvious smutty gags, it’s how he makes this a story about the marginalised. Those earlier scenes detailing Josué’s nightmarish upbringing tie into the book’s overall discussion about those who exist outside the mainstream, whether it’s because of their colour, their class, or their sexuality, and who find themselves, due to a strange set of circumstances, empowered to act…. Condomnauts, brought brilliantly into life by David Frye’s translation, is an unconventional space opera that’s heartfelt, brazen, exciting, and just a little bit naughty.”
— Ian Mond

“This wacky tone and eccentric approach to science fiction is a hallmark of Yoss, whose previous two novels, Planet for Rent (Restless, 2015) and Super Extra Grande (Restless, 2016), announced him as an offbeat, satirical master of the genre.”
— Sean Guynes-Vishniac

“In Condomnauts, Yoss takes readers to the 24th century-Rubble City, Cuba, where Josue Valdes makes a living racing cockroaches. But he finds his true calling as a sexual adventurer in space, where he serves as an ambassador for the Nu Barsa colony. Yoss is Cuba’s preeminent writer of science fiction, and this raucous novel is a fun introduction to the universe he’s populated with humans who use sex to seal intergalactic treaties.”
— Lorraine Berry

“Following the success of Super Extra Grande and A Planet for Rent, Yoss brings us another uproarious space adventure with Condomnauts, a wildly inventive and unapologetic tale that would make even Barbarella blush.”
— Kayti Burt

“Yoss ... turns a number of science fiction narrative conventions on their heads, adds a welcome sex-positive element to things, and meticulously spins a plot that’s more complex (and occasionally bleaker) than it seems."
— Tobias Carroll

“A hilarious and a fantastic read. Human sexuality and stereotypes are questioned all while delivering page after page of heart-pounding and belly-laughing fun.”
— Tracy Palmer

“Condomnauts is everything a good space opera should be—far-reaching, glimmering, gut-wrenching, perilous—but stickier. Much, much stickier."
— The Arkansas International