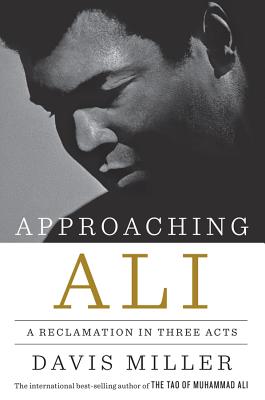 By Davis Miller
$27.95
Unavailable at this time.

So many writers (Norman Mailer, George Plimpton, Tom Wolfe, Hunter S. Thompson, and others) have written about Muhammad Ali, yet Miller might just be the greatest at writing about the iconic boxer. Told over several decades of Ali's post-boxing career, this book truly captures what an incredible individual Ali was, going much further than being a great athlete, Ali is a fascinating human.

The single most intimate look at Muhammad Ali’s life after boxing, told through the story of an unexpected friendship.

On Easter weekend 1988, then struggling writer and movie store clerk Davis Miller drove to Muhammad Ali's mother's modest house in Louisville, knocked on the front door, and waited for an answer. It had been over two decades since he’d first glimpsed The Champ on a black-and-white television—when Miller was an eleven-year-old boy, shattered by the unexpected loss of his mother—and he felt the time had come for him to personally thank the man whose fearlessness, grace, and tenacity gave him the power to overcome a near-paralyzing depression. When the door finally opened, Miller would not only get to meet his “spiritual constant” but also begin a surprising and tender new friendship that would forever transform his life.

Today, more than twenty-five years later, the two still share an uncommon bond, the sort that can be fashioned only in serendipitous ways and fortified through shared experiences. Miller now draws from those remarkable moments to give us a quietly startling portrait of a great man physically ravaged but spiritually young. Beginning with a series of three interconnected anecdotes about Miller's first meeting with the champ—which formed the basis of "My Dinner with Ali," a legendary piece of sports journalism that was anthologized in The Best American Sports Writing of the Century—Approaching Ali continues as a historic tribute, composed of linked vignettes spread out over decades, that is unlike anything else that has been written about one of the world's most famous and loved men.

As readers will discover in these pages, Miller is the Everyman, Ali the Superman in physical decline. Commingled together, the two voices form the all-time most intimate portrait of Ali's day-by-day life in his postboxing career. Through Miller’s eyes, we witness the aging and ailing Ali playing mischievous tricks on unsuspecting guests, performing sleight of hand for any willing audience, and walking over ten miles each day to enjoy an ice cream sundae and talk with strangers. Miller goes on to reveal a side of the boxing legend we never knew was there, whether it be Ali handing out hundred-dollar bills at a Los Angeles bus stop, showing a group of inner-city children the ocean for the very first time, or unexpectedly cracking jokes with the distinctly insightful words he is still able to summon.

Following in the grand contemporary literary tradition of writers such as Gay Talese, Tom Wolfe, and Nick Hornby, Miller gives us a series of extraordinary insights into a man that he has been approaching nearly his entire life. The result is both a new introduction to the human side of a boxing legend as well as a loving and beautifully written reclamation of Muhammad Ali’s life after the ring.

Davis Miller's award-winning stories have been published in many of the leading national magazines—Men’s Journal, GQ, Esquire, Sports Illustrated, and Rolling Stone, among others. He is the internationally best-selling author of two previous books, including The Tao of Bruce Lee, and is co-librettist of the acclaimed chamber opera Approaching Ali, which is based on his classic story, "My Dinner with Ali."

There have been many books about Muhammad Ali, and there will be more, but . . . nobody is more qualified to write about Ali’s post-boxing life than Miller.
— Bill Littlefield - Only a Game, NPR

Magnificent. Unlike anything else that's been written. The writing is astounding, the best ever about Ali.
— Leon Gast, Academy Award-winning director, writer, and producer of When We Were Kings

In clear, observant prose, Miller details how the most outspoken and graceful heavyweight of all time now struggles to knot a tie or make himself understood. Yet in the wreck of ‘the black Superman,’ Miller discovers and celebrates a spiritual Ali, a bodhisattva molded by the unlikely path of boxing and the Nation of Islam…. [Miller’s] engagement and journalistic integrity provide a unique perspective on a man he portrays as a hero for the world.
— Publishers Weekly

Ali, now 74 and courageously battling Parkinson’s disease, remains one of the great figures of 20th-century sports, and this profile finds the boxer’s playful good nature and magnanimous personal spirit intact.

Each of Mr. Miller's Muhammad Ali tales is lyrical, important, and rigorously humanizing. There is music and truth in each sentence he writes. I can think of no higher praise for a writer or his work.
— Maya Angelou

In Approaching Ali: A Reclamation in Three Acts (Liveright), Miller weaves vignettes drawn from his time with the Champ—updates of published work combined with new recollections—to tell a deeply personal story of Ali’s post-career life. From Ali’s take on historic fights to his struggles with Parkinson’s to unguarded moments, as when the boxer performs magic tricks for kids on a South Carolina beach, Miller celebrates the one-two combo of charisma and power that made Ali both his lifelong muse and the most famous athlete on the planet.

Not like anything else that I have read. What a strange encounter between this extraordinary man and his gifted troubadour. One has the feeling of absolute and radiant verisimilitude, which is exactly what one requires.
— Donald Hall, former poet laureate of the United States

From Norman Mailer to George Plimpton to Hunter S. Thompson to Tom Wolfe, Muhammad Ali has inspired some of the best work by America’s best writers. But no one has written about him as well as Davis Miller. Approaching Ali is a book for the ages, a book to be treasured.

I don't know of a better or more human biography of an iconic American than Davis Miller's magnificent portrait of Muhammad Ali. Approaching Ali is the best book about friendship I've read in years. Every sentence in the book is, in one way or another, revelatory, profound, sublime, graceful, naked, true, tender, and uncompromising. Davis is a genuinely great writer.