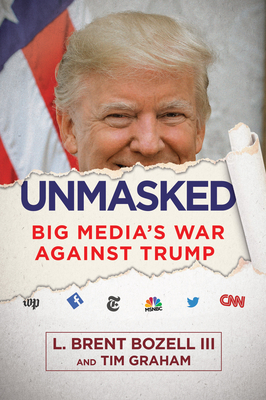 "Objective journalism is dead. Today's leftist 'news' media are activist hacks working relentlessly to destroy conservatism, to literally eliminate it - and the people who live and believe in it. Everywhere they can, they want to bury it and us. Think that's too harsh? You better read Unmasked." -- Rush Limbaugh

"Brent Bozell and I have fought together in the trenches for many, many years. He's an indispensable warrior in the cause of liberty and against the arrogant elites in the press." -- Mark R. Levin, New York Times bestselling author

"This is the story of a media that set out to destroy a president and his administration, but destroyed themselves instead." - From the Preface

Bestselling author and activist Brent Bozell is one of the most outspoken leaders in the conservative movement today. As Founder and President of the Media Research Center, he runs the largest media watchdog organization in America. In this fascinating examination of the media's war on Donald Trump, Bozell and his coauthor Tim Graham expose the weaponized and radicalized "news" media as a direct threat to democracy with their unethical attempts to manipulate public opinion.

No one understands this more than Donald Trump. Since the moment he declared his candidacy in 2015, Trump has faced incessantly and overwhelmingly negative press coverage. First they tried to prevent his election. Ever since that failed, the media radicals have worked tirelessly to remove him from office.

There is no fairness or balance. There is only aggression.

Journalists boil over when Trump insults them as "fake news," but the number of careless and deliberately false stories they have been forced to retract underscores why the media's credibility is collapsing. Unmasked reveals

Unmasked proves that the leftist "news" media want to see Trump removed from office, and will stop at nothing to accomplish that mission, even if it means destroying themselves as well.