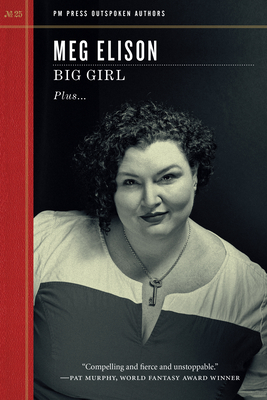 “El Huge” reveals how small-town, small-time teens can accomplish Big Ugly Things on their own. “Big Girl” chronicles the media’s fascination with the towering anxieties of a sixty-foot tall teen. “The Pill,” the collection's previously unpublished centerpiece, celebrates a “miracle cure” for obesity that sends society to a grimly delightful new utopia. “With Such People in It,” also new to readers, welcomes us to a brave new world where cowardice is a virtue. “Gone with Gone with the Wind” is a nonfiction analysis of privilege, denial, literary classics, and personal honesty. “Afterimage” is a one-way trip into a VR world that’s more “real” than our own. Also included is “Guts,” which is about just what its title suggests, as well this volume's characteristically frank and thought-provoking Outspoken Interview.

Meg Elison is one of the fearless “bad girls” in science fiction, fantasy, and transgressive humor. She is an iconoclast, using a caustic new talent to spotlight hitherto off-limits subjects like gender roles, body shaming, female oppression, and political correctness. A high school dropout, Meg Elison bluffed her way into California community colleges and eventually graduated from UC Berkeley. She has written and spoken extensively on the poverty and early queer identity that came to inform much of her work. Her debut novel, The Book of the Unnamed Midwife, won the 2014 Philip K. Dick Award. She is a co-producer of the monthly reading series Cliterary Salon.

"Elison offers a troubling yet hopeful vision of the future." —Los Angeles Review of Books

"A strikingly powerful story of one woman’s physical and emotional resourcefulness under the most dire of circumstances. An apocalyptic page-turner that picks up where Margaret Atwood’s The Handmaid’s Tale left off." —Jackie Hatton, Tor.com

"I could talk about female empowerment, body positivity, and gender flexibility. But those terms are wholly inadequate for Meg Elison’s clear-eyed satire in the guise of fantasy and science fiction. Powered by rage, incandescent with a deep understanding of injustice, angry for all the right reasons, yet still essentially optimistic, these are the stories I need to keep me warm through the long dark night. Compelling and fierce and unstoppable." —Pat Murphy, World Fantasy Award winner

"Meg Elison's stories will raise blisters on your conscience. Her politics are smart, her prose is like a razor, and her characters will break your heart. Read at your own risk." —Annalee Newitz, author of Autonomous

"Meg Elison's work is visceral and compelling. A voice that doesn't so much demand attention as it 100 percent deserves every ounce of it." —Elsa Sjunneson-Henry, Hugo Nominated writer and editor