California Dreamin': Cass Elliot Before The Mamas & the Papas (Hardcover) 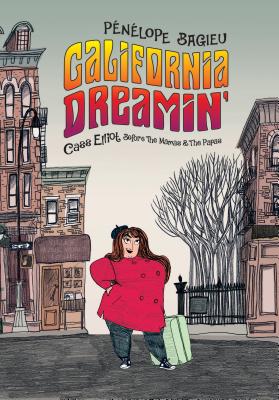 California Dreamin' from Pénélope Bagieu depicts Mama Cass as you've never known her, in this poignant graphic novel about the remarkable vocalist who rocketed The Mamas & the Papas to stardom.

Before she was the legendary Mama Cass of the folk group The Mamas and the Papas, Ellen Cohen was a teen girl from Baltimore with an incredible voice, incredible confidence, and incredible dreams. She dreamed of being not just a singer but a star. Not just a star—a superstar. So, at the age of nineteen, at the dawn of the sixties, Ellen left her hometown and became Cass Elliot.

At her size, Cass was never going to be the kind of girl that record producers wanted on album covers. But she found an unlikely group of co-conspirators, and in their short time together this bizarre and dysfunctional band recorded some of the most memorable songs of their era. Through the whirlwind of drugs, war, love, and music, Cass struggled to keep sight of her dreams, of who she loved, and—most importantly—who she was.

Pénélope Bagieu was born in Paris in 1982, to Corsican and Basque parents. She is a bestselling graphic novel author and her editorial illustrations have appeared all over the French media. She blogs, drums in a rock band, and watches lots of nature shows. Her books with First Second include Exquisite Corpse and California Dreamin'.

Pénélope Bagieu was born in Paris in 1982, to Corsican and Basque parents. She is a bestselling graphic novel author and her editorial illustrations have appeared all over the French media. She blogs, drums in a rock band, and watches lots of nature shows. Her books with First Second include Exquisite Corpse and California Dreamin'.

"[Bagieu's] drawings are suffused with delight . . . Exuberance and sadness coexist in her drawing style, as they coexist in the character of Cass Elliot—whose every moment of joy and perseverance seem to overlay deep loneliness and vulnerability." —The New York Times

“If a graphic novel can be thought of like a three-minute pop song, then French author Penelope Bagieu wisely holds a beautiful epiphany well past the two-minute mark. The timing is sublime.” —The Washington Post


"Bagieu’s drawings are superlative: soft pencil lines that convey detail without constraining her figures and that animate the characters’ exuberant facial expressions." —The Paris Review

"Recommended for older teen collections, this superb addition is sure to be a future graphic novel classic." —School Library Journal, starred review

"Her pencil-sketched characters are distinctive and emotive (and occasionally high and big-eyed), while their lively world is storybookcute and highly referential to the music Cass made so familiar." —Booklist

"Pénélope Bagieu has mastered a magic trick, and it is this: Somehow, even as she suspends our disbelief, she can turn paper into flesh. And ink becomes lifeblood...her characters not only breathe and pulsate with vivid life. They also seem entirely, organically authentic in their own skin." —The Washington Post

"Wonderful . . . her cartooning style is a sheer delight." —Mental Floss