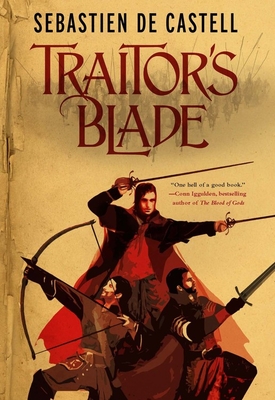 By Sebastien De Castell
Unavailable at this time.
Out of print

"Some books you can't put down. This one won't even let you try; it whirls you along in a wild dance of fights, treachery, and jaw-dropping surprises." —Dave Duncan, author of King of Swords

“In Traitor's Blade, Sebastien de Castell combines the best of Joe Abercrombie and Alexandre Dumas. He can break your heart and spike your adrenaline with the same sentence. Riveting.” — Violette Malan, author of Path of the Sun and The Storm Witch

“Traitor’s Blade never falters, with writing as smooth and decisive as a rapier’s swish through the air and a story as passionate as life itself. I can’t wait to read more about these wonderful characters. Highly recommended!” — Julie E. Czerneda, author of A Turn of Light

“Traitor's Blade is the first ‘new’ fantasy of 2014 that met and even exceeded my expectations.” —Fantasy Book Critic

“Traitor's Blade is just to put is simple: a terrific read. I enjoyed reading it very, very much. Sebastien de Castell directly places himself upfront to many of my favorite authors.” —The Book Plank

“In short, I loved loved loved Traitor's Blade. I would recommend it to everyone . . . Seriously, this is one excellent and remarkably entertaining book! Read it.” —BiblioSanctum

“Like a master-crafted rapier, Traitor’s Blade is perfectly-balanced, sharp and to the point. Very highly recommended, this is a must read.” —Civilian Reader

"If this isn't your most anticipated debut novel of 2014, then you're doing it wrong. Traitor's Blade may well end up going down as one of the strongest first fantasy novels of recent times—it's an absolute stunner that you can't afford to miss.”—Bane of Kings, The Founding Fields