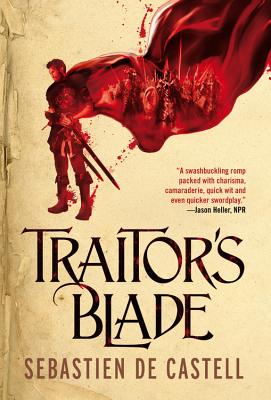 By Sebastien de Castell
Unavailable at this time.
Out of print

This is book number 1 in the The Greatcoats series.

I set out to re-read The Three Musketeers and then I found theTraitor's Blade. No offense to Dumas, but I count this as a win. Traitor's Blade is one part wit, two parts action, and three parts valorous hero. This book is for fans of Michael Sullivan's Theft of Swords series or Scott Lynch's Lies of Locke Lamora.

With swashbuckling action that recalls Dumas's Three Musketeers, Sebastien de Castell has created a dynamic new fantasy series. In Traitor's Blade, a disgraced swordsman struggles to redeem himself by protecting a young girl caught in the web of a royal conspiracy.

The King is dead, the Greatcoats have been disbanded, and Falcio Val Mond and his fellow magistrates Kest and Brasti have been reduced to working as bodyguards for a nobleman who refuses to pay them. Things could be worse, of course. Their employer could be lying dead on the floor while they are forced to watch the killer plant evidence framing them for the murder. Oh wait, that's exactly what's happening.

Now a royal conspiracy is about to unfold in the most corrupt city in the world. A carefully orchestrated series of murders that began with the overthrow of an idealistic young king will end with the death of an orphaned girl and the ruin of everything that Falcio, Kest, and Brasti have fought for. But if the trio want to foil the conspiracy, save the girl, and reunite the Greatcoats, they'll have to do it with nothing but the tattered coats on their backs and the swords in their hands, because these days every noble is a tyrant, every knight is a thug, and the only thing you can really trust is a traitor's blade.

"Traitor's Blade is a swashbuckling romp packed with charisma, camaraderie, quick wit and even quicker swordplay. That said, it's far from candy-coated - and it packs some serious substance . . . darkness is served up deliciously in Traitor's Blade--only de Castell uses it as the sauce, not the soup . . . What makes the book truly sing, though, is its rich historical backdrop . . . De Castell's fight scenes are as sumptuously detailed as the world Falcio inhabits. . . In its own way, Traitor's Blade is as grim and dark as the edgiest fantasy series on the shelves. It's also shot through with heroics, hope and a dazzling aptitude for fun."
— Jason Heller, NPR

"Like the sword its disgraced protagonist carries, Traitor's Blade is short and sharp and smart, and very well wielded, really . . . With a tip of his hat at Alexandre Dumas, Sebastien de Castell make a fine first impression in this entertaining debut."—Tor

"Traitor's Blade is the first 'new' fantasy of 2014 that met and even exceeded my expectations."—Fantasy Book Critic

"If this isn't your most anticipated debut novel of 2014, then you're doing it wrong. Traitor's Blade may well end up going down as one of the strongest first fantasy novels of recent times--it's an absolute stunner that you can't afford to miss."—Bane of Kings, The Founding Fields

"Traitor's Blade never falters, with writing as smooth and decisive as a rapier's swish through the air and a story as passionate as life itself. I can't wait to read more about these wonderful characters. Highly recommended!"—Julie E. Czerneda, author of A Turn of Light

"In short, I loved loved loved Traitor's Blade. I would recommend it to everyone . . . Seriously, this is one excellent and remarkably entertaining book! Read it."—BiblioSanctum

"A gripping plot . . . I was utterly fascinated by the female characters in the book . . . written with vivid narration and humor. It made me laugh out loud and it made me shed an occasional tear. It dragged me right in to the world of Tristia. Traitor's Blade is a great book."—Fantasy Faction

"Like a master-crafted rapier, Traitor's Blade is perfectly-balanced, sharp and to the point. Very highly recommended, this is a must read."—Civilian Reader

"Some books you can't put down. This one won't even let you try; it whirls you along in a wild dance of fights, treachery, and jaw-dropping surprises."—Dave Duncan, author of King of Swords

"In Traitor's Blade, Sebastien de Castell combines the best of Joe Abercrombie and Alexandre Dumas. He can break your heart and spike your adrenaline with the same sentence. Riveting."—Violette Malan, author of Path of the Sun and The Storm Witch

Best Debut Book 2014
"A terrific read . . . Sebastien de Castell directly places himself upfront to many of my favorite authors"
—The Book Plank

"The best Musketeers trope since Dumas's original . . . Fights are well-thought out as de Castell is a former "fight choreographer" (I dare you to put that on your tax return). Fighting, swordplay, and escaping from same form most of the action alongside ten kinds of witty banter, bravado and brio- make no mistake, this is a fun read. The light tone is challenged by ruthless villains, especially Duchess Patriana who, though truly repugnant, is as notably well-constructed as other female characters. An energetic, fun adventure that puts the "musk" back in "musketeer." Guaranteed to increase household swashbuckling by 100%."
—Library Journal

"Is Traitor's Blade destined to be a classic? Well, that's a kind of question I ask myself about books I can get some distance from. I don't want any distance from this book. What I want, just as soon as I finish writing this review, it to read Traitor's Blade again, immediately. And maybe once more right after that."—Black Gate

"A gripping read with genuine emotion and excitement . . . It's written in first person form the point of view of Falcio, one of three rapier-wielding servants of the king from an elite military group. The trio get in and out of scrapes while a larger scenario unfolds, interwoven with flashbacks to fill in our hero's past . . . A great read."
—Mark Lawrence, bestselling author of The Red Queen's War and The Emperor of Thorns series