Freedom from the Market: America's Fight to Liberate Itself from the Grip of the Invisible Hand (Hardcover) 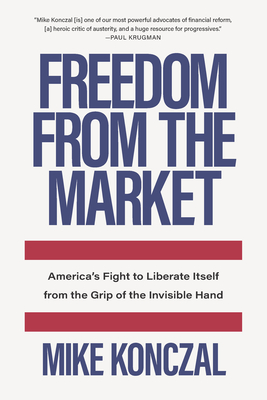 "Mike Konczal is] one of our most powerful advocates of financial reform' a] heroic critic of austerity' and a huge resource for progressives."--Paul Krugman

Health insurance, student loan debt, retirement security, child care, work-life balance, access to home ownership--these are the issues driving America's current political debates. And they are all linked, as this brilliant and timely book reveals, by a single question: should we allow the free market to determine our lives?

In the tradition of Naomi Klein's The Shock Doctrine, noted economic commentator Mike Konczal answers this question with a resounding no. Freedom from the Market blends passionate political argument and a bold new take on American history to reveal that, from the earliest days of the republic, Americans have defined freedom as what we keep free from the control of the market. With chapters on the history of the Homestead Act and land ownership, the eight-hour work day and free time, social insurance and Social Security, World War II day cares, Medicare and desegregation, free public colleges, intellectual property, and the public corporation, Konczal shows how citizens have fought to ensure that everyone has access to the conditions that make us free.

At a time when millions of Americans--and more and more politicians--are questioning the unregulated free market, Freedom from the Market offers a new narrative, and new intellectual ammunition, for the fight that lies ahead.

Mike Konczal is a director at the Roosevelt Institute, where he focuses on economics, inequality, and the role of public power in a democracy. He is a co-author, with Joseph Stiglitz, of Rewriting the Rules of the American Economy. Described as having "a cult following among progressives" by the New York Times Magazine, his writing has been featured in the Washington Post, Vox, Dissent, and The Nation. He is a sought-after commentator on the U.S. economy and has appeared on CNN, MSNBC, All Things Considered, Planet Money, and Lovett or Leave It. Born and raised in Chicago, he now lives in Takoma Park, Maryland, with his wife, daughter, and pit bull.