Love, of a Kind (Hardcover) 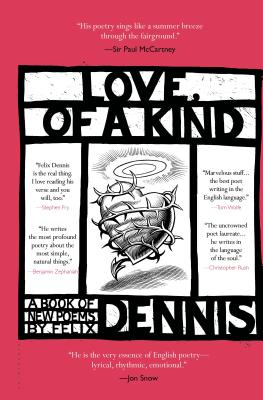 Love, of a Kind was compiled and partly written under the illusion of a death sentence. Diagnosed with cancer of the throat in January 2012, Felix Dennis responded by selecting, revising, and writing poems for what he believed would be his last book. Given the circumstances, his themes—love, life, death, and taking stock—resonate ever more meaningfully.

The poems in Love, of a Kind pull no punches, make no excuses, and seem ever ready to spit in the eye of mortality; poems that Shirley Conran has said "invoke sorrow as fast as regret, pain as readily as passion, and love as tenderly as murderous rage." Featuring beautiful line drawings by Eric Gill, Love, of a Kind presents a writer at the peak of his creative powers.

Felix Dennis is the author of six books of poetry, including A Glass Half Full and Lone Wolf. His work has been performed by The Royal Shakespeare Company, and his popular poetry recitals have filled theaters, on both sides of the Atlantic. For more of his poetry, including live performances by the author, visit www.felixdennis.com.

Eric Gill was a British sculptor, typeface designer, and printmaker. In 1936, the Royal Society of Arts named him the Royal Designer for Industry. He died in 1940.

“His poetry sings like a summer breeze through the fairground.” —Sir Paul McCartney

“Felix Dennis is the real thing. I love reading his verse and you will, too.” —Stephen Fry

“As with Pablo Neruda, he has that simple ability to throw language like a dress over experience and make the mundane marvelous.” —Christopher Rush