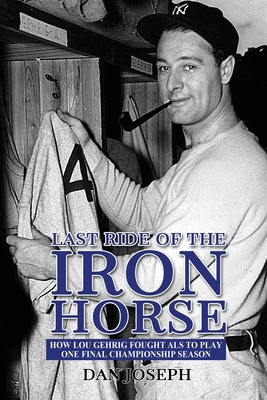 Last Ride of the Iron Horse tells the tale of Lou Gehrig's final year in the Yankee lineup, as he dealt with early effects of the deadly disease ALS. For much of the 1938 season, Gehrig -- dubbed the Iron Horse for his strength and reliability -- struggled with slumps and a mystifying loss of power. Fans booed and sportswriters called for him to be benched. Then, as the Yankees battled for the pennant in August, Lou began pounding home runs like his old self -- a turnaround that in retrospect looks truly miraculous. It may have been a rare case of temporary ALS reversal.

Using rare film footage, radio broadcasts, newspapers and interviews, author Dan Joseph chronicles Gehrig's roller coaster of a year. The story begins in Hollywood, where the handsome "Larrupin' Lou" films a Western that would be his only movie. As the year unfolds, he holds out for baseball's highest salary, battles injuries that would sideline a lesser man, wins his sixth World Series ring, and enters the political arena for the first time, denouncing the rising threat of Nazism.

Joseph also answers questions that have long intrigued Gehrig's admirers: When did he sense something was wrong with his body? What were the first signs? How did he adjust? And did he still help the Yankees win the championship, even as his skills declined?

1938 would be Gehrig's last hurrah. With his strength fading, he ended his renowned consecutive games streak the following May. A few weeks later, doctors at the Mayo Clinic diagnosed him with ALS. On July 4th, the Yankees retired his number in a ceremony at Yankee Stadium. All along, Gehrig showed remarkable courage and grace, never more so than when he told the stadium crowd, "I might have been given a bad break, but I've got an awful lot to live for."